Conor Berry, a reporter at The Republican in Massachusetts has resigned after posting to the social media site Twitter that the Capital Gazette newspaper left a “Make America Great Again” hat at the crime scene.

“Shooter who killed 4 people at Annapolis newspaper dropped his #MAGA hat on newsroom floor before opening fire,” he falsely claimed in the now-deleted tweet. 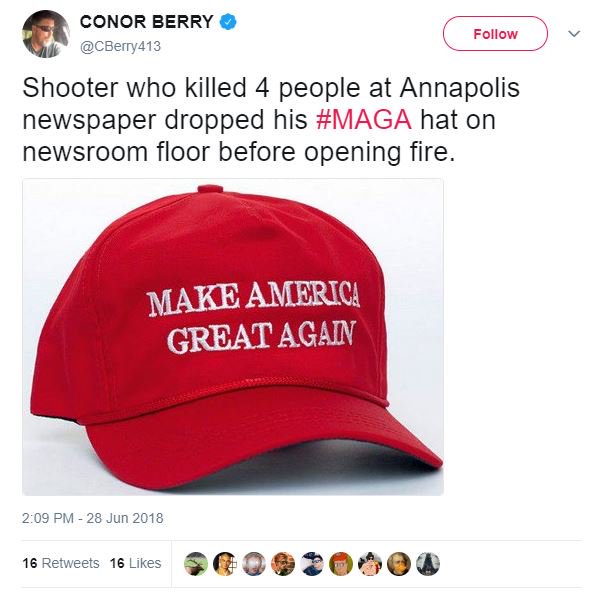 He has since apologized but the damage was already done. In a tweet, he said: “Folks, My 21-year career as a “journalist,” a fancy term that makes my skin crawl, frankly, came to a screeching halt yesterday with one stupid, regrettable tweet. Can’t take it back; wish I could. My sincere apologies to all good, hardworking reporters and to POTUS supporters.”

In an excerpt from his resignation notice published on Friday by The Republican, Conor said that he was “ashamed” of the tweet, further stating that it “taints the good work of fair-minded journalists everywhere.”

As reported by NPR:

The suspect charged into the Capital Gazette offices and used a pump-action shotgun that Altomare said was “legally purchased a year or so ago” to kill five staff members and injure two others on Thursday. In Maryland, shotgun sales are not regulated by state law and only require filling out a federal form and passing the FBI’s National Instant Criminal Background Check System.

The gunman also had barricaded the rear doors of the news company’s building — an apparent attempt either to keep victims from fleeing or to keep police out, Anne Arundel State’s Attorney Wes Adams told reporters Friday.

“The fella was there to kill as many people as he could get,” Altomare said.

Police have carried out searches of Ramos’ apartment and car.

“We did find evidence at the residence,” Altomare said, adding that investigators had found signs that Ramos had planned the attack.