Hillary Clinton has reached a new low, folks… she’s using the tragic death of Heather Heyer, the woman who was killed in a car attack in Charlottesville, to promote her freaking book!

Mediaite obtained a copy of an email that was sent out by Clinton’s site onwardtogether.org and in the email, she references Heyer’s death… at the beginning of the email! The letter concluded with Clinton pushing her book on her subscribers as well as a link to obtain tickets for her book tour.

I have been thinking lately about bravery – the bravery of citizens like Heather Heyer who lost her life fighting the organized forces of hate and divisiveness, of volunteers who are rescuing strangers in the wake of Hurricane Harvey, and of young DACA recipients who are fighting for their future in the only country they know and love.

This fall, I’ll be embarking on a book tour of my own – which means that I’ll be able to see many of you while I’m out on the road. Click here to get more information about where and how you can get tickets, and hopefully I’ll see you soon. 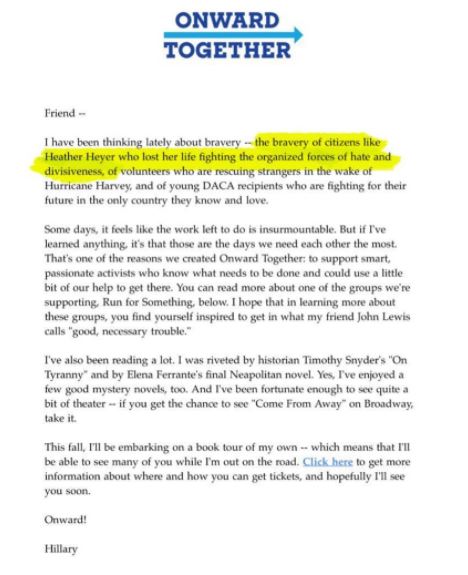 As reported by Mediaite:

However, though Clinton may feel allied to Heyer, she conveniently failed to mention that Heyer chose not to vote for her. Instead, the 32-year-old voted for progressive candidate Bernie Sanders. Additionally, Heyer opted to abstain from voting in the general election, given the main options of Clinton and Donald Trump.

“She voted for Sanders in Virginia’s primary. When Bernie wasn’t the Democratic nominee, Heather didn’t even vote in the general election,” said Heyer’s mother Susan Bro, per The Cut.

Clinton’s advertising letter was released by Onward Together, an organization Clinton established earlier this year. The group is designed to create fundraising ventures on behalf of left-of-center political institutions.

The former Secretary of State’s book has received endless ridicule, mockery, and disdain from many on the left, claiming that “What Happened?” is filled with excuses and blame-shifting from Clinton on why she lost the election.