E. Jean Carroll has accused President Trump of raping her 23 years ago in Bergdorf Goodman. The president claims that he has never met her in his life. Bergdorf Goodman allegedly checked their video tapes and could not find any footage of the two together.

The president put out a statement claiming that the accusation is false. Carroll is trying to hawk a book she wrote in which she made the accusation.

There is a picture circulating from 1987 that shows Trump and then wife Ivana talking to Carroll and her then-husband at an NBC party, but celebrities like Trump are always approached at parties by people, so it\’s likely there was a greeting and they moved on.

E. Jean Carroll claimed in a New York Magazine article which was published on Friday that Donald Trump sexually assaulted her.

The accusation is actually from an excerpt from a new book Carroll is slinging — SHOCKER — she’s selling a book and wants publicity.

Carroll actually claims in her hit piece that she has a “Most Hideous Men of My Life List” and recalls a list of “the 21 most revolting scoundrels” she has ever met.

“As it turns out, a Hideous Man marks practically every stage of my life. And so, Reader, from this cavalcade of 21 assholes, I am selecting a few choice specimens,” Carroll wrote.

“Regarding the ‘story’ by E. Jean Carroll, claiming she once encountered me at Bergdorf Goodman 23 years ago. I’ve never met this person in my life. She is trying to sell a new book — that should indicate her motivation. It should be sold in the fiction section,” the president wrote.

“Shame on those who make up false stories of assault to try to get publicity for themselves, or sell a book, or carry out a political agenda—like Julie Swetnick who falsely accused Justice Brett Kavanaugh,” Trump asserted. “It’s just as bad for people to believe it, particularly when there is zero evidence. Worse still for a dying publication to try to prop itself up by peddling fake news—it’s an epidemic.” 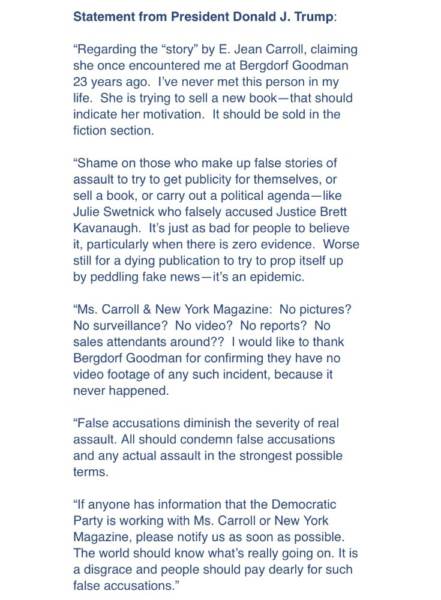