The leftist whackos have lost all control and anything now goes for them, including threats of violence and kidnapping the president’s son. Politics has always been contentious but the Marxists are taking it from words to actions.

That’s what led to the shooting of Steve Scalise that almost cost him his life. The most recent outrage comes from Peter Fonda, brother of Hanoi Jane Fonda. He suggested that he and others should rip Barron out of Melania’s and put him in a cage with a pedophile. 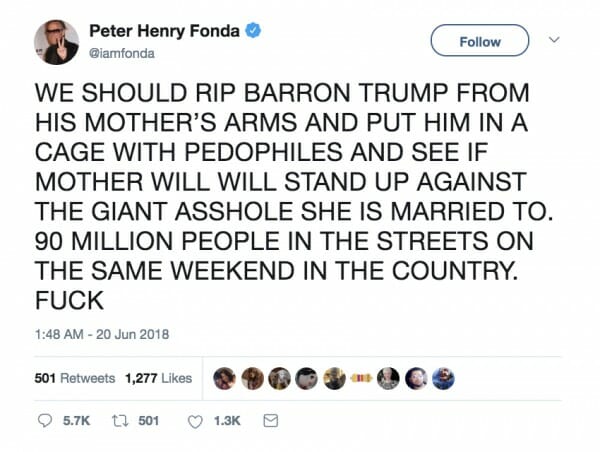 Melania spoke through one of her spokespersons. The Daily Caller spoke to First Lady Melania Trump’s spokeswoman:

Spokesperson for the First Lady, Stephanie Grisham, has informed the Daily Caller that the Secret Service has been “notified” of the threat. “The tweet is sick and irresponsible and USSS has been notified,” Grisham said.

Threatening government officials of the United States is a felony.

Fonda also proposed that Press Secretary Sarah Sanders three children get kidnapped and locked in a basement while calling her a sexist slur.  “SS (Sarah Sanders) is a lying gash, too,” Fonda said, “And “gash” is much worse than cunt. Maybe we should take her children away and deport her to Arkansas, and giving her children to Stephen Goebbels Miller for safe keeping.”

This type of behavior is unbelievable. Would the left had tolerated something like this being said about Chelsea Clinton or either of the Obama girls? Absolutely not! And they would have run the quote nonstop for the next month. Even if you argue the point that Fonda wouldn’t actually do such a thing, I guarantee you he plants a seed inside some crazy’s head. But thankfully, with the Secret Service guarding, they wouldn’t succeed in snatching him but he could gert hurt in the process.