I’m not a violent man, but every now and then I see, or hear of someone doing something so heinous that I just want to slap them silly. That’s the case of the snowflake leftist in Somerville, Ma. This so-called man ripped tiny American flags out of the ground in the Veteran’s cemetery and proceeded to urinate on them. A man passing by the cemetery in his car, George Gatteny, pulled his car over when he saw what the man was doing.

Rather let’s let George tell you in his own words what transpired.

I witnessed something today that outraged me! I was driving down Broadway in Somerville. I stopped behind a bus waiting to pull into Clarendon Station. I looked over to my right and saw young people (early to mid 20’s) go into the Somerville Veterans Memorial Cemetery. As they approached the statue, I saw them grab the 3 or 4 mini flags that were placed in from of the statue. The guy took the flags and tossed them behind the statue. What I saw him do next pushed me to a point where I said to myself “ENOUGH”. The guy started urinating on the flags. I quickly pulled over, got out of my car and headed over to them. The girl was standing by the gate (she must have been the look out). I started yelling at them to stop, asking him as I approached ‘what the hell he was doing’. 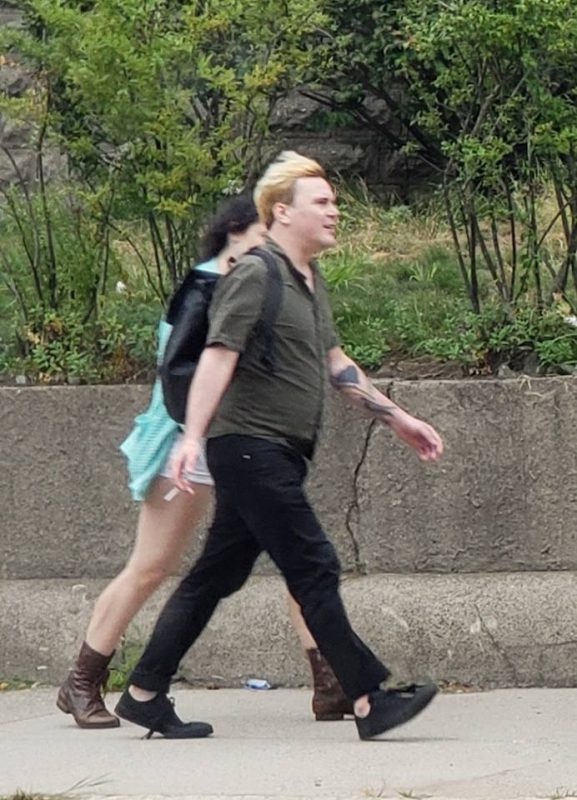 He stopped urinating, pulled up his pants and started walking out of the memorial. Both of them walked up Broadway laughing. I walked behind them for awhile telling everyone I pass what they did. I went back to the memorial to see what damage was done (see photo). An older gentleman came over and thanked me for taking a stand. He told me he has 2 friends buried there. Still outraged, I felt I needed to do more. So I got back in my car and drove up Broadway (toward Tele Sq) to see if I could find them. I wanted photos of them. I saw them walking up Broadway. I pull over across the street and waited for them to catch up. They were across the street and I snapped a few photos from my car (see attached photos). What possible reason could they have for desecrating a WW2 Memorial?? There are consequences for our actions. They probably thought no would do anything. They were WRONG!

UPDATE…I met with a detective from Somerville PD this morning. I gave them my statement and all photos. They are all over this.

Finally, if you live in the Somerville area, take close eye open for the man in the cover photo. If you don’t live in the area, also share this story and maybe someone will recognize him. Let’s make this scumbag famous.