The fake news and Democratic politicians have managed to pull the wool over the eyes of the average Democratic voter. These Democratic voters are who Lincoln was referring to when he said, “You can fool some of the people all of the time.”

Their mind numbed brains will believe anything Nancy Pelosi and Chuck Schumer tell them is the truth. To date, with over two years of investigating the FBI and Mueller have not even been able to uncover the slightest bit of evidence to implicate that President Trump colluded with anything. When you think about it, it’s very sad they could be so ignorant of facts.

Fake news is a serious problem in our political life. I’m not referring to a pathetically small number of Facebook ads bought by Russian provocateurs. I’m talking about the fake news that was paid for by the Hillary Clinton campaign and the Democratic National Committee; fabricated by Democratic Party-allied consultants; propagated by the FBI and the CIA; promoted by the broadcast networks, CNN, MSNBC, the New York Times, the Washington Post, and the Associated Press; trumpeted by pretty much every senior elected Democrat; and kept alive by the appalling Robert Mueller. The claim that the Trump campaign colluded with the Russians to “steal” the 2016 presidential election is the great fake news of our time.

How successful have the Democrats been in propagating that myth? This survey by The Economist and YouGov suggests that they have been successful beyond their wildest dreams. First the numbers, then some observations. 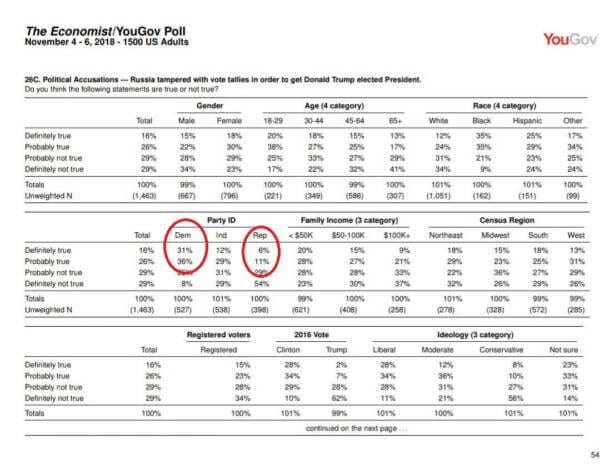