New Report On Who May Have Killed DNC Staffer Seth Rich

A new report has surfaced from the Profiling Project, led by Republican lobbyist Jack Burkman, which claims that DNC Staff member Seth Rich was likely killed by either a “hired killer” or a “serial murder” and not a botched robbery.

As written by Justin Caruso for Daily Caller:

Rich, a 27-year-old Democratic National Committee (DNC) staffer at the time of his murder in July 2016 in Washington, D.C. was the victim of a botched attempted robbery, police have said.

The Profiling Project report released Tuesday claims that “Seth’s death does not appear to be a random homicide” or a “robbery gone bad,” though it provides no evidence that the killer was hired by someone. 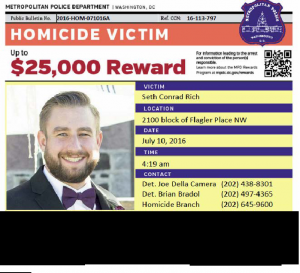 The group, however, received “no special access to any materials, evidence or persons and due to case sensitivity, conducted only informal, limited interviews. The bulk of our report is based on statistics, prior research and Logos.”

“The crime scene was very organized to the point of being sanitized,” the report wrote. “This would indicate careful planning on the part of the offender, control of the entry to and exit from the crime scene as well as in-depth understanding of law-enforcement investigative processes.”

A variety of conservative commentators have speculated that Rich’s death may have been more nefarious than simply a botched robbery. Sean Hannity urged an investigation, which led to a campaign to take down his advertisers.

“With such a sanitized crime scene and no emotional indications, this is not Offenders [sic] first kill,” according to the report, leading the group to claim that the killer would be “by the FBI definition, a serial killer.”

Brad Bauman, a spokesperson for the Rich family, told The Daily Caller in an email, “The Rich family was not provided a copy of the preliminary report, never saw the report or was otherwise consulted in the preparation of the report.”