The memorial dedicated to President Abraham Lincoln has been vandalized. The perpetrators used red spray paint and wrote “f**k law”, according to the National Park Service.

The paint is being removed using a paint stripper that is safe for use on stone such as this. Many US Civil War-era monuments have been defaced or removed over the last 12 months. 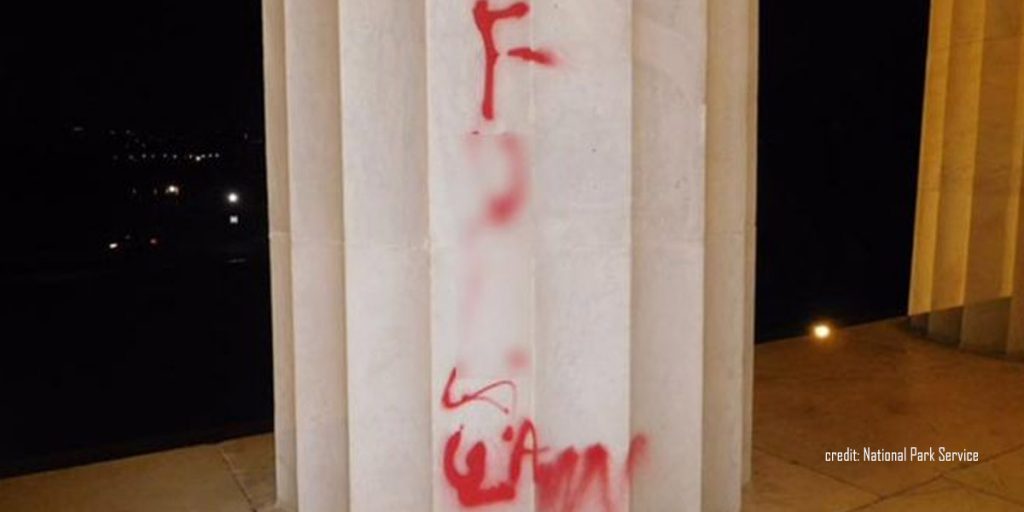 President Lincoln, as you know, led the United States government during the Civil War with the southern states of America. He eventually ordered all African-slaves be freed in 1863 only be to assassinated 5 days after Robert E Lee’s surrender, ending the war.

Statues to Confederate leaders have been targeted for removal by many cities across the US, including Charlottesville, following a 2015 hate attack by a man in South Carolina who used the rebel flag to espouse his racist views.

On Monday, protesters in Durham, North Carolina, toppled a bronze statue to a Confederate leader as police filmed the crowd.

Durham County Sheriff Mike Andrews later issued a statement saying police are reviewing the video in an effort to identify and prosecute those responsible for bringing down the 1924 statue.

President Donald Trump is currently seeing some heat his way for… how he denounced the events in Charlottesville, VA… with some Liberals totally ignoring the fact that he did, in fact, denounce them. This is something the President has done on multiple occasions over the years, too.

This will not be the last we see of this sort of behavior.

If you hate our customs, our history, our heritage well then… Delta is ready when you are. Bye…

These Liberals have some how fooled themselves into believing that their rights supersede all others. I’m sorry but that’s not how this country works.