The Day Antifa Has Been Warning You About Is Here But Will Anything Happen?

For weeks now social media has been bombarded with claims, allegedly by members of Antifa, that something big was coming on the 4th of November, 2017.

The bits and crumbs have been picked up by several conservative-based groups such on Facebook wherein “details” emerge of the start of violence and a so-called “second civil war” on the rise. Whether or not the last bit came from an actual Antifa source or not is entirely unknown to me.

But what I do know is that Antifa and similar organizations do have something planned and the question on many minds is will it be something violent?

For months now members of the alt-left, on the whole, have been pushing for more militant actions against those they deem alt-right. Where they proclaim basically anyone who disagrees with them as “Nazis” with heavy promoting of punching said-alleged-nazis.

But again, will anything happen. If you go by social media, yes.

Groups like Refuse Fascism, who are actually communists, still maintain that they will seek non-violent ways to fight what they see as a “fascist” regime which really seems ironic when you realize that they are commies.

And according to their website, several cities are already expected to participate in whatever escapades are on the horizon for today.

Above are a list of cities, according to Refuse Fascism who may have something planned. If you live in one of these cities I would recommend checking it out, just in case.

Then we see the probable trolls… 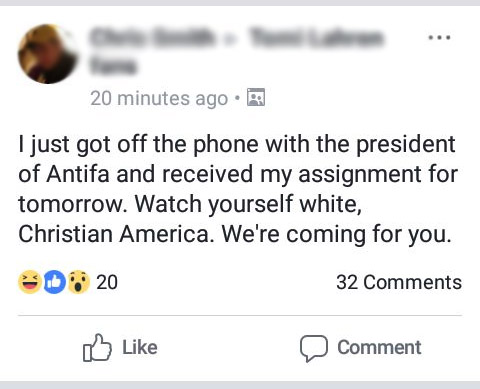 Stuff like this has been getting posted all over Facebook, with many ignoring it. I mean… is there even an Antifa president? Come on!

Still… will something happen? This post is primarily a warning, to be on the lookout and to be safe.

Here are some facts we have managed to nail down:

1. News About November 4 Began to Spread After Protestors Blocked Highway 101 in California

2. Refuse Fascism Is Organizing the Nov. 4 Event and Wants the Protest to Be Reminiscent of the January Women’s March

3. They Hope the Protest Might Last for Several Days or Until Trump and Pence Are No Longer in Office

4. Refuse Fascism Is Not Calling for Violence on Nov. 4

5. ‘The World Can’t Wait’ Organization Is Associated with Refuse Fascism and Protested Bush in 2005/2006

According to Heavy.com, The group Refuse Fascism shares a mailing address (305 West Broadway #185, New York, NY, 10013) with The World Can’t Wait, a national movement to halt and reverse“the terrible program of war, repression, and theocracy that was initiated by the Bush/Cheney regime and the ongoing crimes that continue to this day.” The World Can’t Wait organized protests calling for the end of the Bush regime and ran a full-page ad in The New York Times, USA Today, and other papers in 2005 and 2006.

Then, in a very disturbing thread on Reddit, one user asked “So what is the plan for November 4?” and was responded, by at least one user, with “In my opinion, I say we should all be arming ourselves and taking to the rooftops and streets to defend our cities. If they want a war I say let’s give it to them. Let them fire the first shot and then let those pathetic commie bastards know we mean business. What is the consensus of the rest of you? I love my country, and even though I am not a military serviceman I would still gladly lay down my life for my country. Should we be preparing ourselves for war? Or do we stand by? Because again in my opinion if these commies follow through with this plan it will only cement a Trump victory in 2020.”

It should be noted that this particular reply has since been removed from the thread but the point is some paranoia is getting stirred up.

Refuse Fascism reiterated their claim that they do not want a violent protest and do not seek to remove Trump unconstitutionally from office, with the article saying: “For all the talk of “regime change,” these activists insist they’re not looking to initiate an unconstitutional coup. The exact method of pushing Trump out of office is hazy, and they’re open to different possibilities. As they described it, if Congress refuses to impeach, then advisers could declare the president unfit to serve under the 25th Amendment of the Constitution. Trump’s inner circle could pressure him to resign, or maybe the president would simply quit in frustration. To naysayers, the activists point toward the Arab Spring and the resignation of South Korea’s president last year as evidence of the efficacy of mass protest.”

So I keep bringing up what they’re saying vs what Antifa and Antifa-like-movements have done so far. In fact, according to Dave Brooks for The Daily Caller, there have been several acts of violence made by Antifa-minded people and these are but a few of the total:

–A Tennessee man was assaulted at a garage sale for being a Trump supporter.

-A Trump supporter in New Jersey was attacked with a crowbar on the street.

-A high school student was attacked after she wrote that she supported Trump on social media. The perpetrator ripped her glasses off and punched her in the face.

-The president of Cornell University’s College Republicans was assaulted the night after Trump won the election.

-A Trump supporter was beaten and dragged by a car.

-A Trump supporter was knocked unconscious after airport protesters repeatedly beat him on the head.

-A Trump supporter was attacked after putting out a fire started by anti-Trump protesters.

-Republican Rep. Claudia Tenney received an email threat that read, “One down, 216 to go,” shortly after the shooting at the Republican congressional baseball practice.

And again, these are but a few of the total acts of violence and don’t even include the last 5 months!

So, my loyal audience, please be safe out there. Even though those in the front are calling for non-violence, the alt-left’s record suggests anything but.