A second woman is now accusing Keith Ellison of abusing her during their relationship. She doesn’t have emails, as well as a video, like Karen Monahan. Rather she has a 911 report from the night he abused her.

Amy Alexander also claimed Ellison had abused her during a 2005 relationship. It was serious enough to call 911. Ellison is running for Attorney General of Minnesota.

Finally, these reports of battered women probably won’t help. The primary is today and with women’s groups calling for his resignation, it can’t help. 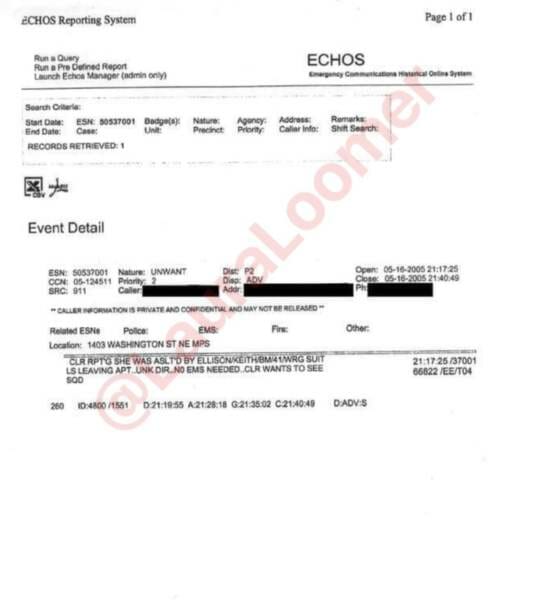 The caller’s name on the report has been redacted, but according to a records search under the name of “Amy Alexander”, Alexander lived at 1403 Washington St NE, Minneapolis, Minnesota, which is the address on the reports, which documents the reported assault as taking place on May 16, 2005 at 21:17:25, which would be 9:17:25 pm.
Underneath the location noted on the report, the report says,

Keith Ellison is currently 55 years old. The age of the Keith Ellison noted in the police report from 2005 says the accused was a 41-year-old black male, another fact that supports Alexander’s claim.
Amy Alexander is a Democrat activist who said she was having an affair with Ellison. In 2006, she wrote an article called “Coming Out Of The Dark: Breaking The Silence About The Anointed Candidate. The article was published by the Wright County Republican.
More From Laura Loomer
According to Alexander, her on and off relationship with Ellison continued in 2004, but it quickly ended in May 2005, when she claims Ellison arrived at her house uninvited and assaulted her, causing her to call 911 and report the domestic assault.
“In May, Keith wanted to try and quiet me so he came to my home uninvited,” Alexander wrote. “We had words. His anger kicked in. He berated me. He grabbed me and pushed me out of the way. I was terrified. I called the police. As he fled he broke my screen door. I have never been so scared.”
Ellison denies all charges against both women and any other women he may have known and assaulted.