New Zealand is panicking because one nutcase shot up a mosque and now they are going door to door to confiscate every gun owned by a law-abiding citizen in the country. I can’t help but wonder if New Zealand would be doing this if it were a Christian church that got shot up.

The letter reads: NOTICE TO SURRENDER AIRGUN OR ANTIQUE FIREARM

I, Inspector Olaf Karl Jensen, a Commissioned Officer of Police, hereby give notice that in my opinion you are not a fit and proper person to be in possession of an airgun or an antique firearm. Police are currently holding the following described airguns

You may within three months after the date of this Notice or such longer period as the Commissioner of Police may allow, sell or otherwise dispose of any airgun or antique firearm owned by you to a person approved for this purpose by a member of the Police.

Failing that, all airguns or antique firearms delivered to a member of the Police may be detained for such a period as the Commissioner of Police thinks fit, or may, in the discretion of the Minister of Police, become the property of the Crown, free and discharged from all right, title or interest possess in respect thereof by any person.

You may by way of origination application, appeal to a District Court Judge against this Notice. (Section 62, Arms Act 1983 refers).

My reason for this decision is as follows;

1. I do not believe you to be a fit and proper person to be in possession of an airgun.

2. Police hold serious concerns regarding your mental and emotional wellbeing.

Should you wish me to review my decision or you dispute the facts you may make written submissions or arrange an appointment with me within two weeks of the date of this notice.

Any submissions you do make must be accompanied by a letter from a medical practitioner attesting to your mental and emotional wellbeing at this time. 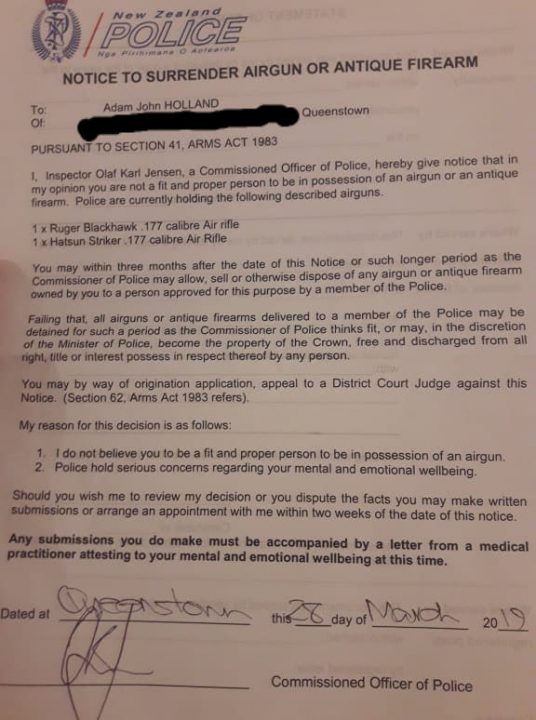 When asked further, they said it’s because I’ve been on the record supporting US President Donald Trump.

You can’t freely support the US President in New Zealand without facing persecution.