Keith Ellison could be in deep trouble as a woman is coming forward with accusations that he assaulted, including dragging her out of her bed by the feet.

Her son claims he found a two-minute video of Ellison dragging his mother out of his bed and telling her to get the f— out of his house. That video is not yet available to the public, but the woman, Karen Monihan has now coming forward and is revealing her abusive relationship with Ellison. Ellison is a member of the House and is vice chair of the DNC.

“This post was brought to my attention because I was tagged in this post. Domestic Violence is never ok. The incidents described are troubling. I call on Keith Ellison to answer these allegations.”

This post was brought to my attention because I was tagged in this post. Domestic Violence is never ok. The incidents described are troubling. I call on Keith Ellison to answer these allegations.https://t.co/CQ1LSVfZqf

“I am so proud of my son for his courage. But this situation impacted me. If you have anything to say, please say it me and leave him out of it. No nasty comments to him ”

“My brother and I watched our mom come out of pure hell after getting out of her relationship with Keith Ellison,” Austin wrote in a Facebook post Saturday before detailing the nature of the abuse. His post comes as Ellison runs attorney general in Minnesota.

“I was using my moms computer trying to download something and I clicked on a file, I found over 100 text and twitters messages and video almost 2 min long that showed Keith Ellison dragging my mama off the bed by her feet, screaming and calling her a ‘fucking bitch’ and telling her to get the fuck out of his house,” he wrote.

Austin added: “We were ready to go public but our mom begged us not to and she along with others convinced us it wasn’t in our moms best interest.” Neither Karen nor Ellison have responded to The Daily Caller News Foundation’s request for comment about the validity of the Facebook post.

Ms Monahan tweeted out about the affair. This would end his career if not for the fact that he is a Democrat. 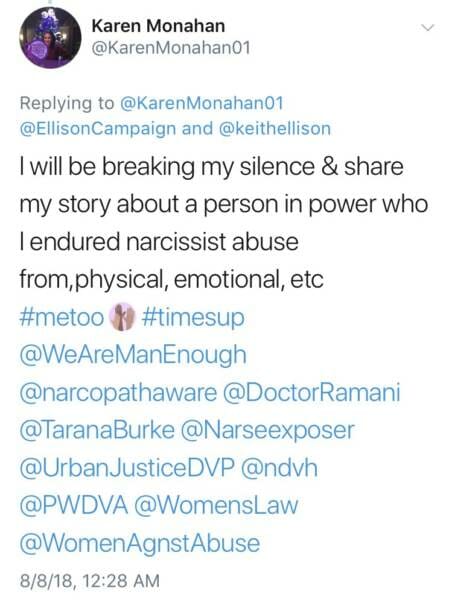 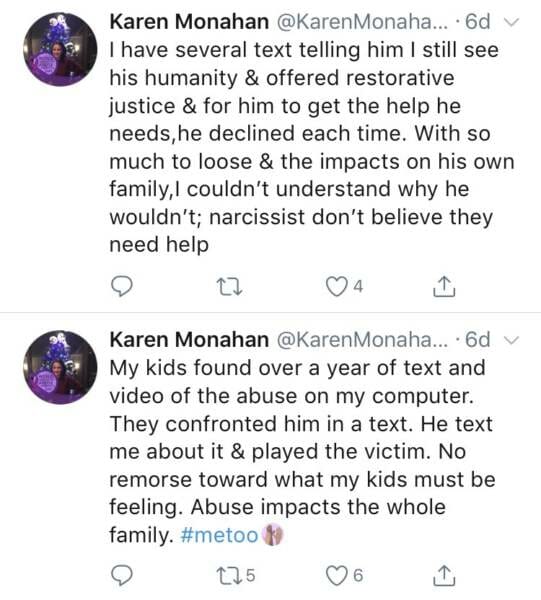