Someone who wishes to remain anonymous says that Jeffrey Epstein had a painting of Bill Clinton wearing Monica’s blue dress and red high heels.

Monica’s blue dress proves that she and Bill had something in common.

They both smoked but didn’t inhale.

The picture is supposed to have been hanging in his Manhattan home. 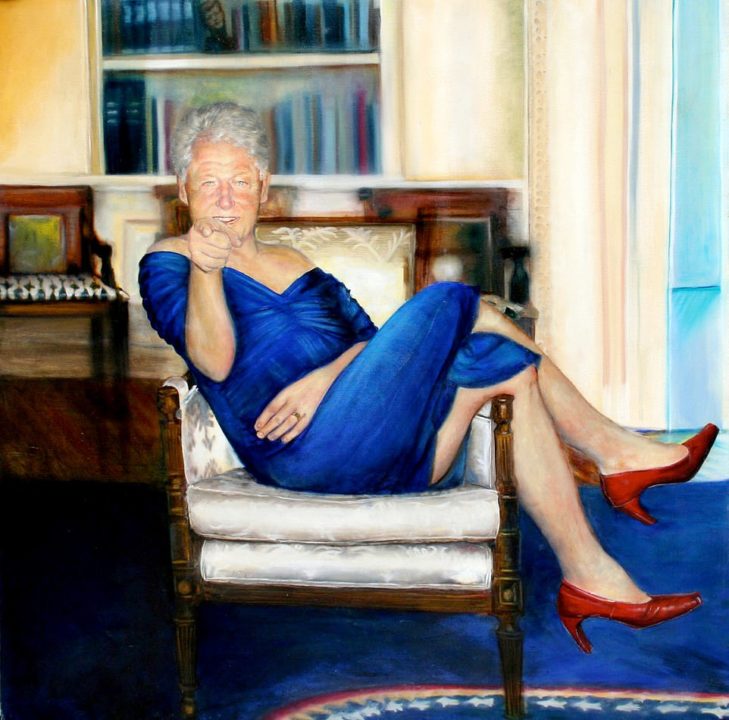 The original painting is by Australian-American artist Petrina Ryan-Kleid, although it is unclear if Epstein had bought the canvas or had a print mounted.

Clinton did visit Epstein’s home at least once, meaning he may have seen the picture when he was there.

From The Daily Mail

Clinton has however denied being on Epstein’s ‘pedophile island,’ Little St. James – a denial which Donald Trump sought to cast doubt on this week.

The presence of the picture is a new twist in the relationship between Clinton, his family and Epstein.

Last month the former president’s office said he had not known anything of Epstein’s crimes and had taken four trips with him in 2002 and 2003 – although flight logs showed that he had taken a total of at least 26 individual flights in the course of those.

One of Epstein’s former sex slaves, Virginia Roberts, claimed she saw Clinton on the island for a dinner held in his honor shortly after he left office, and stood by the claim when questioned under oath.

After the financier’s apparent suicide on Saturday morning, Trump retweeted a suggestion that the Clintons were somehow involved in the death and a linkto court documents setting out Roberts’ evidence.

Additionally, Epstein’s alleged procurer, Ghislaine Maxwell, was a guest at Chelsea Clinton’s wedding to Marc Meezvinsky, at least a year after the time when Bill Clinton says his relationship with Epstein ended.

The origin of the painting is unknown. DailyMail.com has seen metadata which verifies where and when the picture was taken. It was hanging against a dark-colored wall in Epstein’s stone fortress.