US Intelligence notified  British spy bosses about the junk Hillary dossier before they informed President Trump, which reinforces the belief that the British were in on the deal and were conspiring with the US Intelligence community, namely John Brennan and James Clapper, to prevent Donald Trump from becoming president.

It is also probable that other countries were involved. Why? For the same reason, they planted dossier stories in the press. So they could later claim that their fake dossier was confirmed by independent sources. The more we dig, the deeper it gets and we have no idea the entire scope even now. 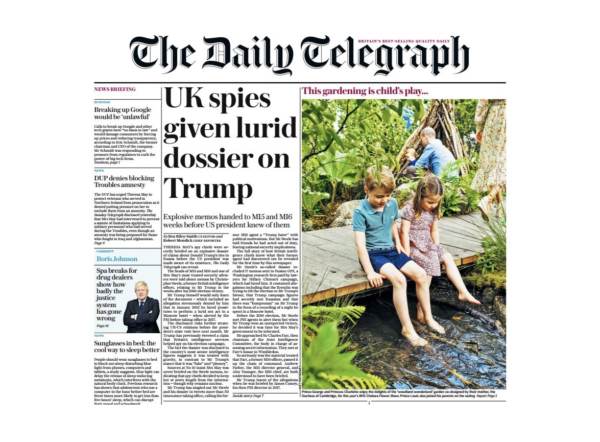 British spy chiefs were briefed on Christopher Steele’s dossier before Donald Trump knew of its existence.

Heads of MI5, MI6 + one of Theresa May’s most trusted security advisers all knew of the Russian links claims before Trump.

“Former CIA analyst Larry Johnson accuses United Kingdom Intelligence of helping Obama Administration Spy on the 2016 Trump Presidential Campaign.” @OANN WOW! It is now just a question of time before the truth comes out, and when it does, it will be a beauty!

As Joe Hoft at The Gateway Pundit reported  —-  There is solid evidence that proves a foreign government meddled in the 2016 US Election. But that government was the UK, not Russia!

After more than two years of the Mueller investigation, millions of dollars and the mainstream media’s relentless attack on President Trump, what do we have? Nothing really.

President Trump tweeted in February 2018 that if the goal of Russia was to create discord in the US then they have succeeded. “They are laughing their asses off in Moscow. Get smart America!”