Hillary Clinton, the woman who armed terrorists in both Libya and Syria say that President Trump is giving aid and comfort to ISIS, whom he destroyed.

Trump is pulling our troops out of Syria, now that ISIS is holding on to a very small slice of Syria, with Syrian and Iraqi troops on both sides. There is an estimated 5,000 ISIS soldiers left after the terrible onslaught American and other troops brought down upon their heads.

Now, the president is pulling 2,000 troops out of Syria and Hillary Clinton, with hopes of a third try at the presidency, is criticizing him.

Secretary of State Hillary Clinton knew that the US was sending arms from Libya to Syria back in 2011, a year before the Benghazi consulate attacks.

Hillary Clinton denied she knew about the weapons shipments during public testimony (under oath) in early 2013 after the Benghazi terrorist attack.

Senator Rand Paul questioned Hillary Clinton about this gun running program back in January 2013 during her testimony on the Benghazi terrorist attack.

Assange told the Democracy Now Channel Hillary pushed arms transfer to Syria from war-torn Libya — where she led the charge to remove the regime.

Julian Assange: So, those Hillary Clinton emails, they connect together with the cables that we have published of Hillary Clinton, creating a rich picture of how Hillary Clinton performs in office, but, more broadly, how the U.S. Department of State operates. So, for example, the disastrous, absolutely disastrous intervention in Libya, the destruction of the Gaddafi government, which led to the occupation of ISIS of large segments of that country, weapons flows going over to Syria, being pushed by Hillary Clinton, into jihadists within Syria, including ISIS, that’s there in those emails. There’s more than 1,700 emails in Hillary Clinton’s collection, that we have released, just about Libya alone.

Today Libya is a failed state where they hold open slave sales in public. 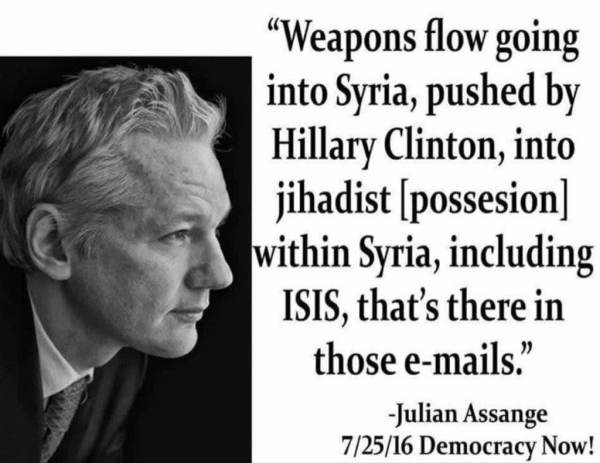 Actions have consequences, and whether we’re in Syria or not, the people who want to harm us are there & at war. Isolationism is weakness. Empowering ISIS is dangerous. Playing into Russia & Iran’s hands is foolish. This President is putting our national security at grave risk.