When the story first hit the wires that DNC deputy chief Keith Ellison, a Muslim, met with Screwy Louis Farrakhan, Ellison did what Democrats do best. He lied.

He first claimed that the meeting never happened and then he accused a reporter of bringing up something that happened in 1995. More lies. It was a private dinner with Louis Farrakhan and the president of Iran, Hassan Rouhani. And it wasn’t 1995. it was 2013, just less than five years ago.

He wasn’t alone. Rep Gregory Meeks was there also. We know this because of pictures and a video of it.

Now, Ellison has been exposed for lying about a meeting with Louis Farrakhan and the President of Iran in 2013. According to The Wall Street Journal — On MSNBC’s “Morning Joe” in December 2016, Mr. Ellison angrily accused his critics of a “smear campaign” for “talking about something that happened in 1995,” when Mr. Ellison was 32.

The Nation of Islam website posted photos from the dinner. 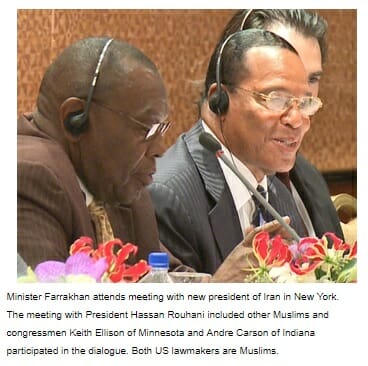 More From The Gateway Pundit

For the record Nation of Islam leader Louis Farrakhan: has long been pegged both racist and anti-Semitic. Farrakhan has praised Adolf Hitler, condemned Jews, and spouted off hateful rhetoric about his belief that white people are subhumans created by an ancient African scientist.

The CBC, Congressional Black Caucus has long been fascinated with communists and Islamic extremists. Twenty-one current members of Congress from the CBC met with Farrakhan years ago, hugging him like a dear old friend including Maxine Waters, hater of all things American.