Kim Jong-un made a terrible miscalculation. Evidently, he thought he was dealing with Barack Obama and he started trashing the US to get concessions in the upcoming talks. He may have thought he could play Trump the way Iran played Obama, who wanted a deal at all costs even if it was an extremely bad one. Donald Trump is a different kind of president. (Thank God)

He wants to make a deal but only if it’s a good one for the United States. It became apparent that North Korea was playing games and President Trump promptly canceled the meeting. I will make a prediction here. The same progressives in the media and in Washington that criticized Trump for trying to set up the meeting, will now criticize him for canceling. It’s a good move on Trump’s part in order to keep us holding all the card in the negotiations. 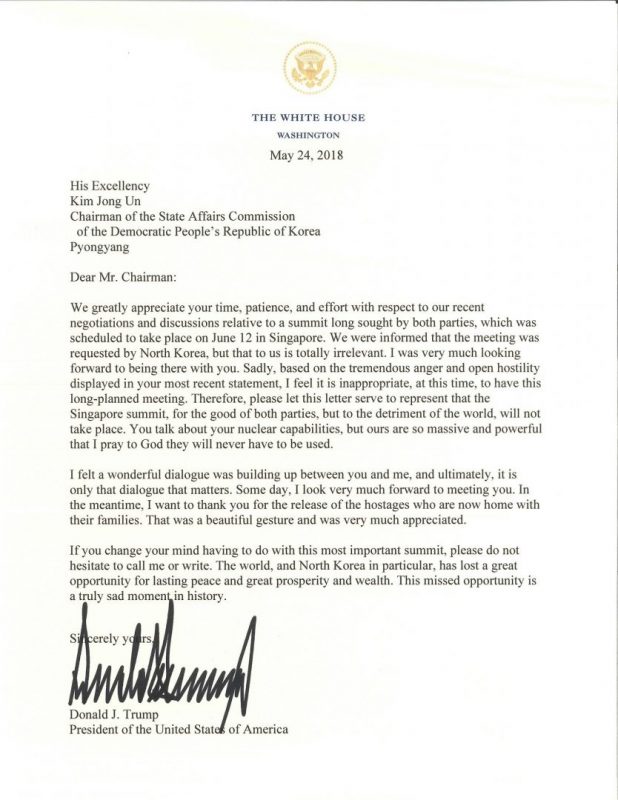 North Korea blasted Pence for recent comments referencing the possibility of dismantling Kim Jong Un’s regime if it refuses to de-nuclearize and referencing its nuclear stockpile. The regime said “I cannot suppress my surprise at such ignorant and stupid remarks gushing out from the mouth of the U.S. vice-president,” adding “we could surmise more than enough what a political dummy he is as he is trying to compare the DPRK, a nuclear weapon state, to Libya that had simply installed a few items of equipment and fiddled around with them.”

North Korea also threatened the U.S. saying “to borrow their words, we can also make the U.S. taste an appalling tragedy it has neither experienced nor even imagined up to now.”

I found Trump’s letter to be a stroke of genius the way he made it clear that nuclear war with the United States would be a disaster for North Korea, while still leaving North Korea for an opening to have a summit and softening the harsh rhetoric with a thank you for releasing American hostages.