President Trump has been called many things since he announced he was running for president. But one thing no one calls is shrinking violet. He complains about things he can’t control but takes swift action when he is. So, in keeping with his tradition, President Trump has criticized the Deep State for hiding documents or redacting them so much, you don’t know what was said.

Specifically, he was talking about the almost 700,000 emails the FBI never bothered to read from Anthony Weiner’s laptop. Considering the zeal the FBI and DOJ has displayed when going after Trump with no evidence, you would think they would nail Hillary when the evidence is clear. But they aren’t. So President Trump told them that he may have to get involved.

Trump and his allies have long used the FBI’s investigation into Clinton’s use of a private email server when she was secretary of state as a way to discredit the Justice Department, particularly as the special counsel investigation has come to fruition.

The president blames Sessions for recusing himself from the Russia probe in May 2017, which ultimately lead to Mueller’s appointment.

Sessions on Thursday fired back in one of his strongest rebukes of the president to date.

“The actions of the Department of Justice will not be improperly influenced by political considerations,” he said. 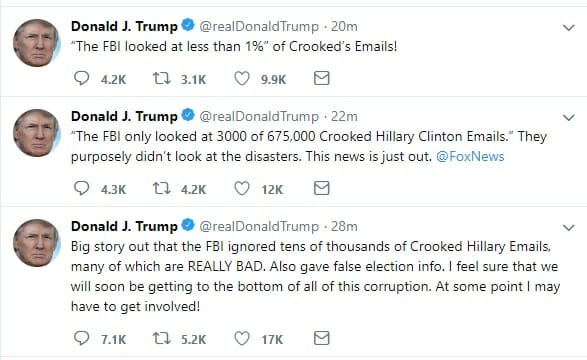 THIS IS IT! TRUMP IS GOING TO BLOW THE DEEP STATE OUT OF THE WATER!

President Trump tweeted this out on Saturday morning:
DONALD TRUMP: Big story out that the FBI ignored tens of thousands of Crooked Hillary Emails, many of which are REALLY BAD. Also gave false election info. I feel sure that we will soon be getting to the bottom of all of this corruption. At some point, I may have to get involved! “The FBI only looked at 3000 of 675,000 Crooked Hillary Clinton Emails.” They purposely didn’t look at the disasters. This news is just out. @FoxNews “The FBI looked at less than 1%” of Crooked’s Emails!