San Juan Mayor Caren Yuliz Cruz Soto who made a name for herself (I can’t tell you the name as this is a family page) for bashing President Trump for not sending her city any relief supplies as she is standing in front of a packed warehouse with supplies, is under FBI investigation for the way the supplies were distributed. 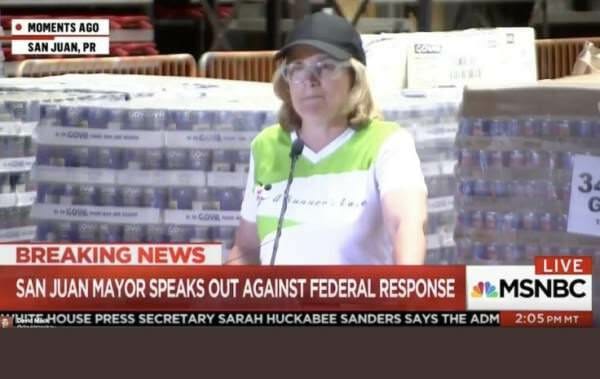 FEMA held meetings every single day so that mayors could tell them what they needed the most. Cruz never attended a meeting for fear she might miss a television camera. Cruz was a huge Hillary supporter who went out of her way to denigrate the president. The local FBI office received numerous complaints that the FBI refused to elaborate on other than it required an investigation into Cruz.

In a report from El Vocero de Puerto Rico, the FBI is investigating several suppliers in a probe launched after former procurement director Yadira Molina filed a lawsuit claiming she faced punishment for reporting illegal activities to the local comptroller.

The investigation has since grown to include several contractors, the news outlet reported, according to Epoch Times.

Carlos Osorio, a spokesman for the FBI in San Juan, told Epoch Times last October the agency received several complaints of alleged corruption in the distribution of relief goods, and that it was required to look into the matter.

The president and FEMA reacted quickly to get much-needed supplies to the island but because of the extensive damage, getting supplies from the ships was an extremely slow process. The supplies were there just as the president promised but he had no control over the roads and trucks.