Joy Reid is at it again and this time it could cost her a bundle. That is, of course, if Rosalyn La Liberte decides to sue her for slander and defamation of character. MSNBC could also be part of a really big payday.

Reid accused Liberte of calling the boy a “dirty Mexican” and likened the woman to the 1950s anti-desegregation racists, adding, “hate is real, Y’all”. The only problem is it never happened, not only by Liberte’s account but also by the boy she was supposed to have harassed, 14-year-old Joseph Luevanos.

Luevanos said: “But, I felt like she was still trying to keep it civil which I appreciate .”

After their mini-debate Liberte and Luevanos hugged it out. Does that sound like she said all the things Reid accused her of? To make matters worse, the deranged left are now attacking her business. Whether she wants to or not, she may be forced to sue to make up for the money she will lose especially if the nimrod leftists manage to destroy her business.

Alan Vargas, a 17-year-old March for Our Lives student activist from Corona, California posted to twitter on June 28 the photo, uncredited, with a made-up caption that falsely accused the woman of calling the boy a “dirty Mexican” and saying he would be among “the first deported”. 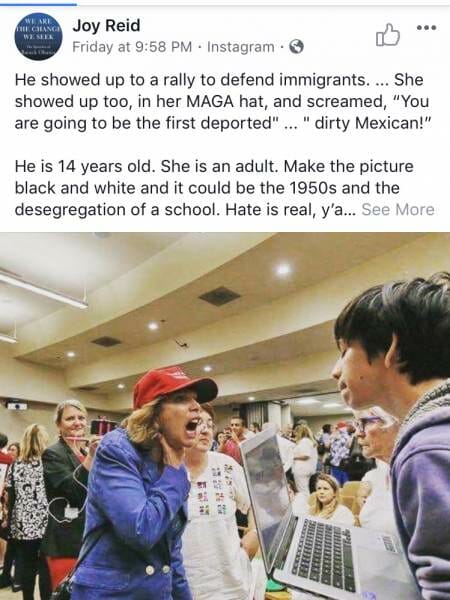 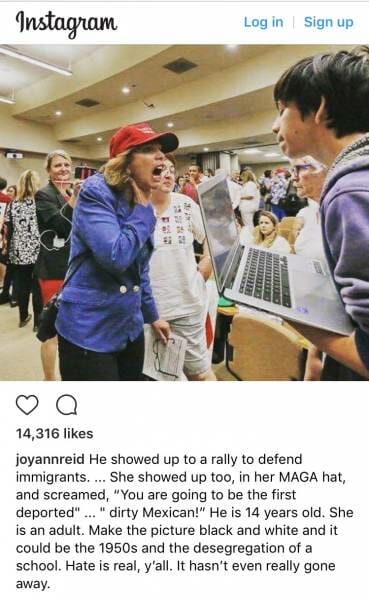 Fox 11 in Los Angeles spoke to La Liberte and Luevanos about the photo for a report published Friday night.

A photo taken by the Ventura County Star that’s been making the social media rounds has become twisted as it churns its way through the internet. Activists have been spinning it in different directions. Some have even alerted companies doing business with Rosalyn La Liberte’s contracting company that they should boycott her firm. In the photo she LOOKS like she’s verbally attacking a 14-year old boy. Now, the two people in the photo are speaking out!

But, in a tweeted-photo that’s raced through social media like a wildfire that’s exactly how it looks. Looks can be deceiving. La Liberte doesn’t live in Simi Valley but went to this past week’s city council meeting because she says she’s passionate about the Federal Government’s fight against California’s sanctuary state status.

14-year old Joseph Luevanos was there to take the other side.

During a recess in the meeting the teenager says he started a conversation with the woman to try and understand her feelings, “but, I felt like she was still trying to keep it civil which I appreciate .”

Both he and his mom say there were rude people saying ugly things like the teen would be the first to be deported. For the record, he was born and raised in this part of Southern California and he didn’t like that. But, he says, what you see in the photo isn’t a confrontation but a conversation

La Liberte says, I never said anything disparaging. I never did.”