Rep Devin Nunes has requested that the DOJ approve a list of 17 witnesses he would like to call before his committee in order to get answers on FISA abuse and other related topics. On the list are both sets of FBI lovers, Peter Strzok and Lisa Page and FBI lawyers  Sally Moyer and Kevin Clinesmith, who were recently unmasked my Chairman Meadows: 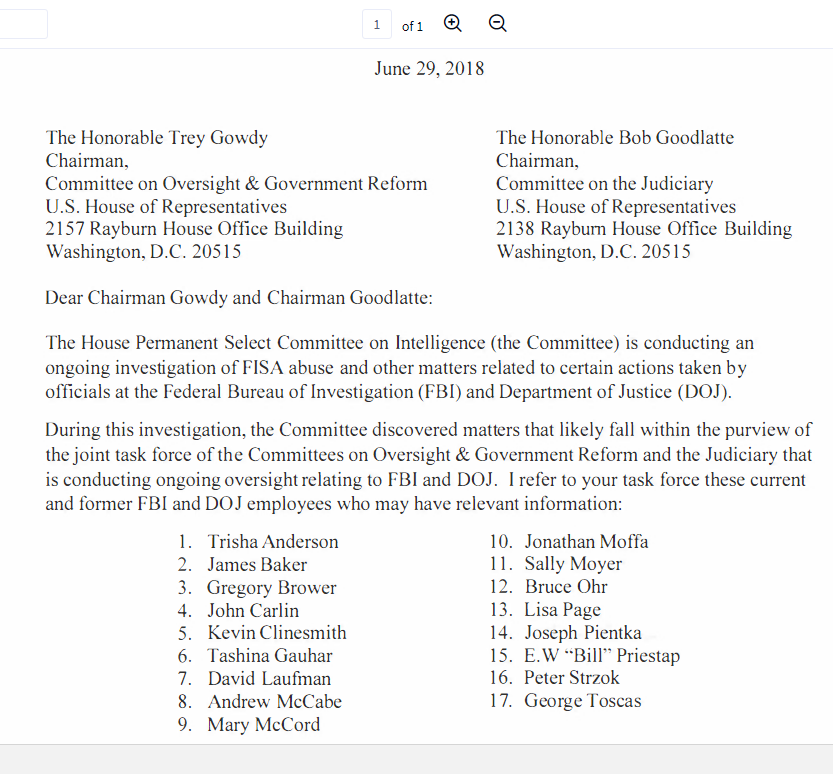 The full list of 17 officials named by Nunes include:

Among those named by Nunes are Joseph Pientka, the agent who was part of the FBI’s interview with then-national security adviser Michael Flynn. Senate Judiciary Committee Chairman Chuck Grassley, R-Iowa, has also attempted to speak with Pientka, but the DOJ has rebuffed his requests.

Flynn pleaded guilty in Special Counsel Robert Mueller’s Russia probe to making false statements to the FBI in that interview. He also lost his job at the White House after he was said to have misled Vice President Pence about a discussion with the Russian ambassador at that time,  Sergey Kislyak.

But Republicans on Capitol Hill are seeking more information about that interview, as recent revelations have raised questions about the guilty plea itself. They say former FBI Director James Comey, in fact, indicated to lawmakers that FBI agents did not believe Flynn intentionally lied about the talks with Russia’s ambassador.

How much do you want to bet that Rosenstein laughs in his face?