Adam Schiff Gets Owned By Kimberly Strassel After He Criticizes Trump

Like everything else in America, Adam Schiff is accusing President Trump of being wrong about the California wildfires.

The president said environmental policy in California makes wildfires worse. California doesn’t allow clear-cutting in order to create breaks keeping fires from spreading. As well as cutting dead trees down. Dead trees burn much faster than live ones. Anyone that has ever used firewood in their fireplaces will attest to that. Wood needs to “cure” or dry out in order to burn. This led to Twitter posts about the wildfires.

President Trump: “California wildfires are being magnified & made so much worse by the bad environmental laws which aren’t allowing massive amounts of readily available water to be properly utilized. It is being diverted into the Pacific Ocean. Must also tree clear to stop fire from spreading!”

Adam Schiff: “You’ve been in office for 18 LONG months and you still don’t have a science adviser, so allow me to help. Environmental protections have nothing to do with the wildfires in CA. Climate change does. We’re not going to let you use fires as an excuse to clear-cut our forests.”

Kimberly Strassel: “Allow me to help YOU, Mr. Schiff. Here is a link to December USDA report showing a record 129 million dead trees in California, citing forest mismanagement for fires. Your own California state fire office signed on to it.” 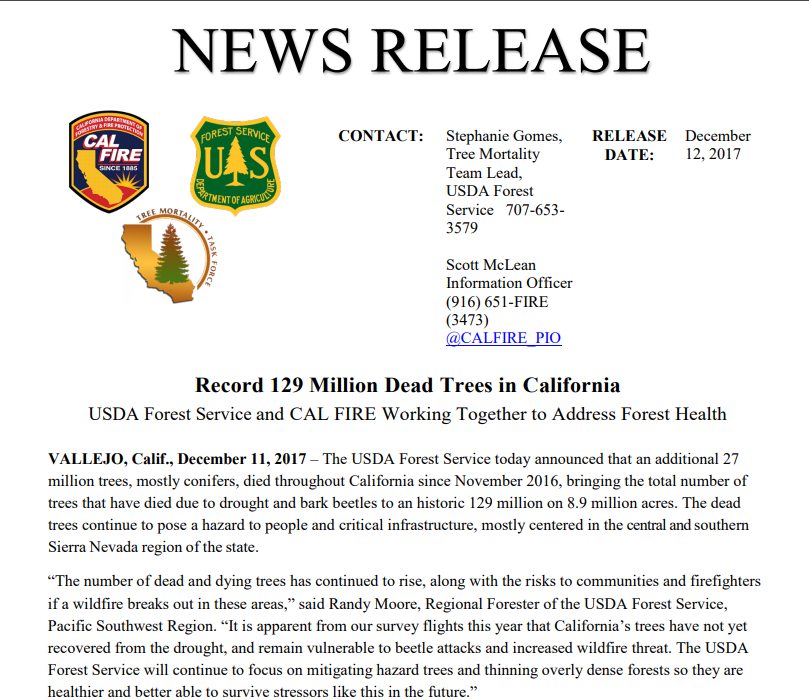 If you read the entire report you will see the federal and state agencies responsible for forests agree the dead trees are a major problem. Therefore making wildfires more dangerous.