Splinter, a liberal group with 586,000 followers on Twitter, has threatened start using a tactic from the seventies that Bill Ayers used so often way back then. The reason we are seeing so many threats like this is because rarely is anything done about it.

And nothing will be done about it until people start dying. The Democratic party has become hard core communists and anarchists. If we allow this to continue, we will get exactly what we deserve. 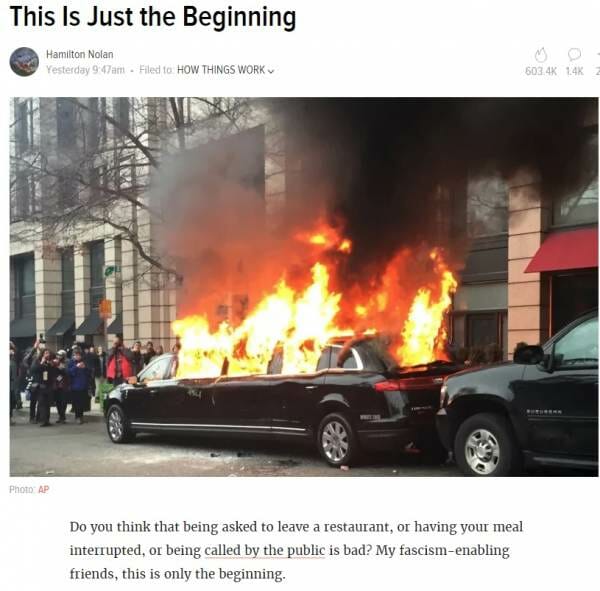 Do you think that being asked to leave a restaurant, or having your meal interrupted, or being called by the public is bad? My fascism-enabling friends, this is only the beginning…

…Read a f*cking history book. Read a recent history book. The U.S. had thousands of domestic bombings per year in the early 1970s. This is what happens when citizens decide en masse that their political system is corrupt, racist, and unresponsive. The people out of power have only just begun to flex their dissatisfaction. The day will come, sooner than you all think, when Trump administration officials will look back fondly on the time when all they had to worry about was getting hollered at a Mexican restaurant. When you aggressively f*ck with people’s lives, you should not be surprised when they decide to fuck with yours.

Stop working for this man. Stop enabling him. Stop assisting him. Start fighting him. The people who are responsible for what is happening are not going to get out of this with their happy wealthy respectable lives unscathed. This is a country that locks poor people in cages for decades for trying to make $20. This is a country that is “tough on crime.” Remember? And the ones who make the laws are not going to like what happens when America starts to regard them as the criminals.

I remember the 70’s and believe me, we don’t want to go back there.