Well Apparently All Republicans Are Racists…

Bart Knijnenburg, A Clemson University professor, announced this week that ALL Republicans as well as President Trump Supporters are, in fact, racist… actually calling us “racist scum” during a Facebook post. He then went on to call for violence be taken against “white supremacy.”

Knijnenburg is an assistant professor in Human-Centered Computing for Clemson University. And has since hidden his posts about this from the public.

Here are some screenshots that our friends over at Campus Reformed managed to obtained to show you just what kind of person he is on Facebook: 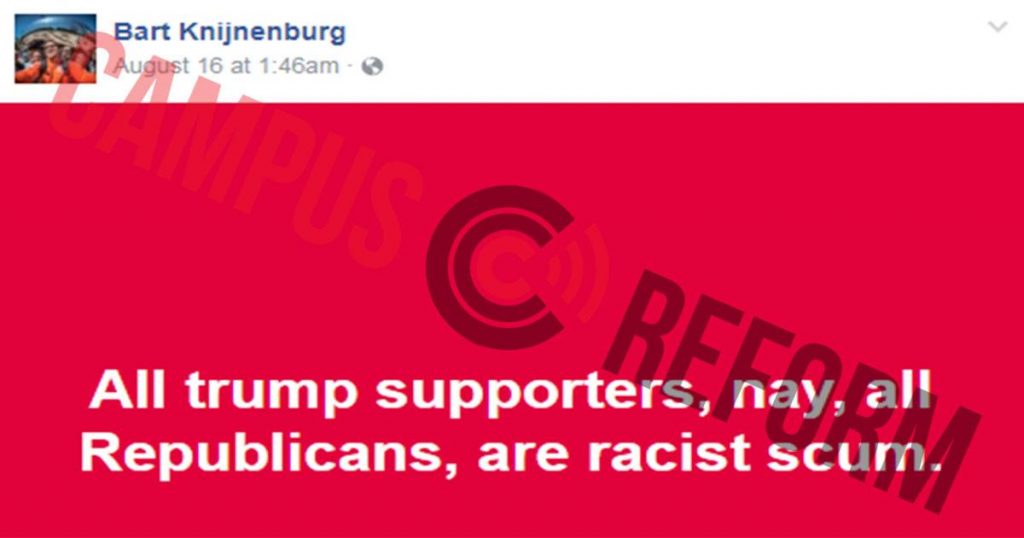 As reported by Campus Reform:

Some individuals questioned the broad accusation, one of whom chided Knijnenburg that “We must be careful not to generalize as this is arguably the root cause of the extreme right’s existence,” adding, “I’ve always looked up to you, as my 1st yr mentor but also for passing on the idea to study abroad. But it saddens me a bit to see this coming from you.”

“You should come live in the south for a while. It’s exhausting,” Knijnenburg replied. “The republican ideology of ‘everyone is equal and nobody deserves a handout’ is naive at best, covertly racist at worst. I truly believe that turning a blind eye makes you complicit in what is happening now.”

As reported by The Daily Caller:

In a report published Wednesday, Campus Reform captured screenshots of his tirade before he made his Facebook account private.

“All republicans? Yes,” he wrote. “Your complacency made this happen. Pick a side: denounce your affiliation, or admit you’re a racist.”

“I haven’t seen any of them renounce their political affiliation yet,” said the professor in response to a former student who suggested he was making an unfair generalization towards conservatives. “In fact, all of them fell in line with Trump once he became president. They selectively criticize him when it is politically convenient to do so, but they don’t take any actual sustained actions.”

He told anyone who doubts his claims that all Republicans are racist to “come live in the south for awhile.” He added his belief that the GOP’s meritocratic views are inherently racist.

“The republican ideology of ‘everyone is equal and nobody deserves a handout’ is naïve at best, covertly racist at worst,” he said. “I truly believe that anyone turning a blind eye makes you complicit in what is happening now.”

In a separate post, he equated President Trump, his voters, the GOP, and former chief White House strategist Steve Bannon to “Nazis,” the “KKK,” and the “alt-Right.” He called them all racists.

The professor also called on his readers to topple statues of Thomas Jefferson and George Washington.