Tis the season, right folks? Soon the leaves will be changing color and the temperature will be just right for sweater weather, yoga pants, and ugg boots. and let’s not forget all the “basic white girls” will be lining up around the corner for their Pumpkin Spice Lattes! Surely a favorite of the season!

But wait just a minute! According to one feminist group, these dadgum Pumpkin Spice Lattes ARE FUNDING WHAT?!!

Well according to the group UltraViolet, these basic-white-girl drinks are funding white supremacy… and I really wish I was making this up, ya’ll. In fact, they state “a powerful and rapidly growing community of people mobilized to fight sexism and create a more inclusive world that accurately represents all women,” though this might be the first time you’ve ever heard of it, is leading a campaign to banish the PSL, claiming the drink “funds white supremacy” and “racism in the White House.” 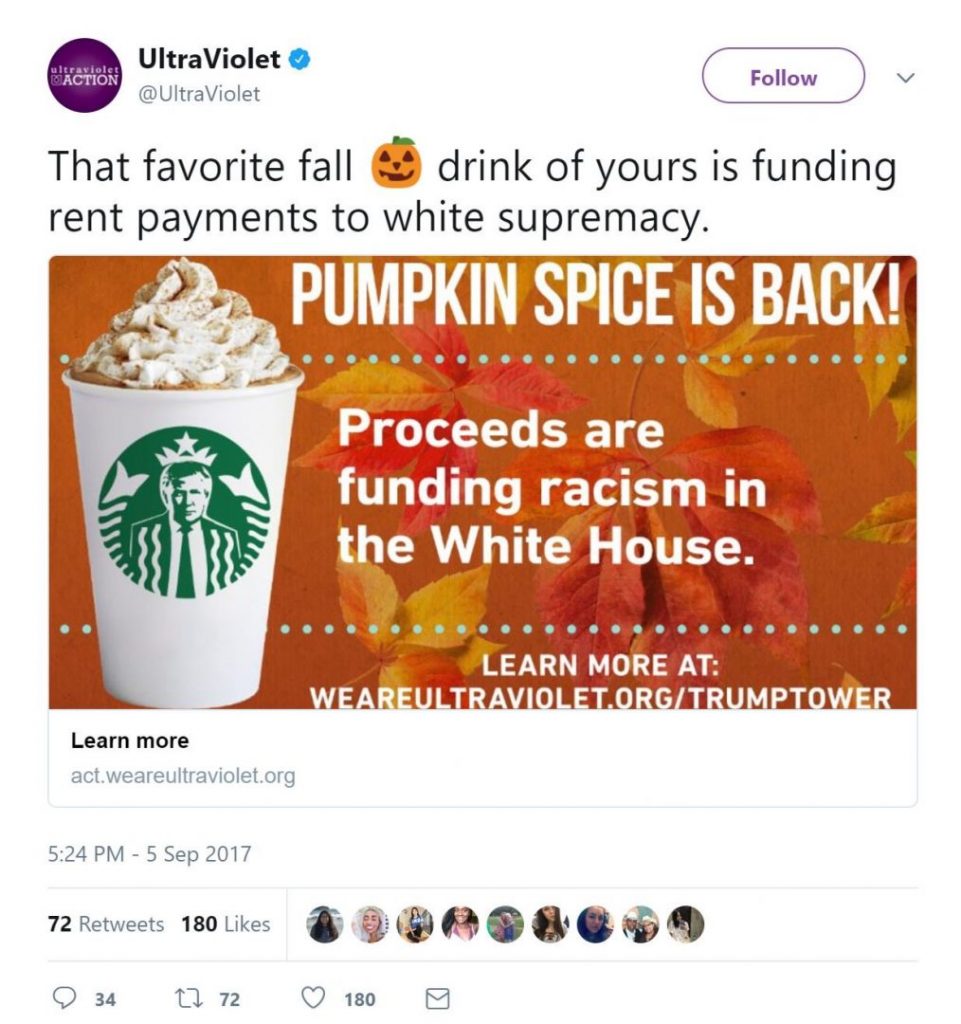 According to UltraViolet’s website, fully 70,000 people have given Starbucks a piece of their mind about their so-called support for “white supremacy.”

If the campaign seems a little off, though, that’s because it is. Starbucks has a stellar progressive reputation, and has, in the past, often seemed willing to alienate more conservative customers to follow its far-left ideals. The CEO supports open borders and gay marriage, and there’s a yearly social media freakout over Starbucks’s holiday cups, which occasionally flirt with taking the “holiday” out of the holiday.

The problem here, though, is that Starbucks, like Nike and Tiffany, has a location in Trump Tower, which means Starbucks — at at least one of its locations — pays a pittance in rent to the Trump Organization, which owns the building. “Starbucks and Nike — both companies that seek to profit off of a progressive and inclusive brand — have stores in Trump Tower in New York City. They have likely paid millions of dollars in rent to Trump over time — money that has given him a platform to spew hate for years,” UltraViolet claims.

So for your enjoyment! Here’s a nice little tutorial on making a SPIKED Pumpkin Spice Latte! Enjoy!