Robbie Travers, a 21-year-old third-year law student, mocked Isis on Facebook is now being investigated by the University of Edinburgh, declaring it a “hate crime” and saying that he put “minority students at risk and in a state of panic and fear.”

Mr Travers wrote on Facebook: “Excellent news that the US administration and Trump ordered an accurate strike on an Isis network of tunnels in Afghanistan.

“I’m glad we could bring these barbarians a step closer to collecting their 72 virgins”.

This was in response to the “Mother of All Bombs” being dropped by American forces in Afghanistan. 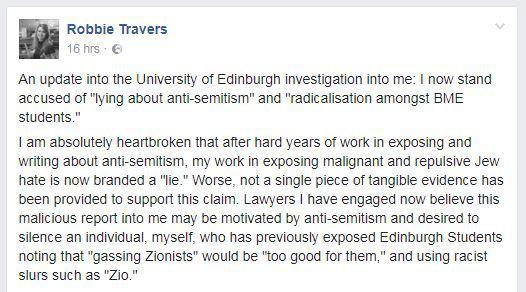 Allman stated that the Facebook post of Robbie Travers “puts minority students at risk and in a state of panic and fear while attending the University of Edinburgh.”

Any student who claims to be in a “state of panic or fear” because of Mr. Travers’s statement is either weak and hyper sensitive, or just trying to score points.

In fact, that should be the standard response to anyone who claims to be offended by a Facebook post, statue, use of a definite pronoun (“him” or “her”), etc. –“Are you weak and hyper sensitive, or just trying to score points?”

This is the world we are living in, folks. It’s not only happening here in the United States but all over the world. You can’t even talk smack about freaking TERRORISTS, honest to goodness terrorists, without fear of being labeled Islamophobia and getting kicked out of school.

As reported by Independent.co.uk:

But Mr Travers said the complaint against him came in retaliation to him pointing out how Ms. Allman had allegedly referred to black men as “trash,” before adding “all men are trash.”

A spokesman for the university confirmed complaints alleging misconduct against Mr. Travers was being investigated, telling the paper: “We are committed to providing an environment in which all members of the university community treat each other with dignity and respect and our code of student conduct sets out clear expectations of behavior.”