Ben Shapiro appeared at Berkeley… yup it happened! And the school is actually offering to counsel its students because of it. Not because of the content of his lecture, no nothing of that sort. It’s apparently being offered solely because Shapiro exists and appeared on campus!

This tidbit from a letter sent out by the school to its students provides more insight….

Our commitment to free speech, as well as to the law, mandates that the students who invited Shapiro be able to host their event for those who wish to hear him speak. Our commitment to the principles of community mandates that all students, faculty, and staff be able to be present on campus, engaging in their regular academic activities without fear. Achieving this poses unusual challenges for us; this memo lays out the arrangements that we are putting in place.

At 4 p.m. on September 14, UCPD will establish a closed perimeter around Zellerbach Hall and surrounding buildings. Buildings near Zellerbach Hall will be closed at 4 p.m., with no access permitted. The perimeter will be assembled over the course of the day starting in the morning. Affected buildings include: César E. Chávez Student Center, Alumni House, Martin Luther King Jr. Student Union, Sproul Hall, and Eshleman Hall…

Support and counseling services for students, staff and faculty

We are deeply concerned about the impact some speakers may have on individuals’ sense of safety and belonging. No one should be made to feel threatened or harassed simply because of who they are or for what they believe. For that reason, the following support services are being offered and encouraged…

And they wonder why we call them freaking snowflakes! 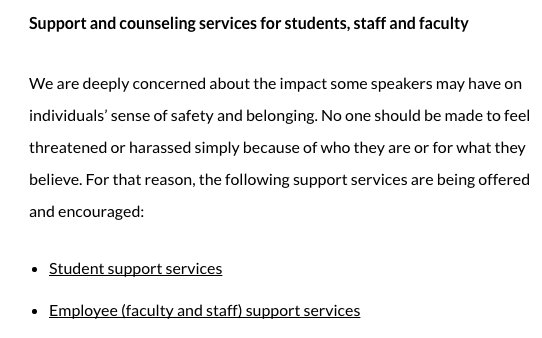 As reported by HotAir.com:

The only person facing a serious threat during Shapiro’s speech is Shapiro himself but the rules of the Orwellian “speech is violence” game require casting him as the aggressor and the mob as the victim. When a hostile stranger trespasses on your property, you have the right to expel him by force to defend it. This is a turf war and Shapiro is invading liberal turf. The idea of a public university as a public forum or academia as a space for the free exchange of ideas is a fart in the wind compared to the feral left’s territorial imperatives here. The higher the cost, figuratively and literally, for a conservative to come to campus, the fewer conservatives will come. In that sense, the Antifa droogs are practicing basic free-market economics in organizing a rampage whenever a right-winger dares to set foot in Berkeley. They’re taxing a disfavored good until it becomes prohibitively expensive.