This is pretty important to take note of, everyone. James Comey, I feel, believes he has some sort of power or sway over the Trump administration and this is where it will come out. I say, show us the proof. We need more than just words. We’ll see how it goes tomorrow.

Below are 12 questions that we feel Comey MUST be able to answer or account for given the level and measure his testimony may have on our country’s future. 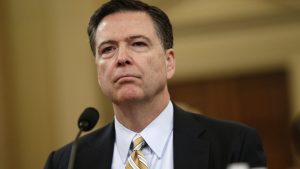 I personally don’t believe whatever he has will hold any weight, but again we’ll see.

As Written By Guy Benson for Townhall:

Fired FBI Director James Comey will testify before the Senate Intelligence Committee Thursday morning, having been cleared by Special Counsel Robert Mueller — a fellow former FBI Director — to do so. After weeks of President Trump and his team appearing intent to dream up creative new ways of behaving suspiciously and acting guilty, the White House finally made a smart call on this front by declining to invoke executive privilege in an effort to block Comey’s appearance. That would have been a strategically harmful lose-lose proposition, and they were right to avoid it.

CNN reported in late May that a source close to Comey says he plans to testify that he “now believes that President Donald Trump was trying to influence his judgment about the Russia probe,” at a meeting recorded in a widely-discussed February memo — but he is not necessarily convinced the president’s pressure amounted to an unlawful act such as obstruction of justice.  As Washington steels itself for another barrage of nationally-televised, high-stakes hearings starring Mr. Comey, there are a number of questions that come to mind as citizens attempt to assess the seriousness of the president’s alleged February overtures on behalf of his sacked National Security Adviser, Michael Flynn — as well as other related matters:

(1) The New York Times reported last month that you wrote a memo in February 2017 detailing the contents of a series of conversations you had with the president.  Did you author such memos?  The Times story claims that you chronicled the president expressing his preference that you, and by extension the Bureau, drop an ongoing investigation into Mr. Flynn.  “I hope you can let this go,” your account allegedly quotes him as saying.  Is that what you wrote, and is that what he said?

(2) Did you understand the president to be referring to the (separate) criminal probe into Mr. Flynn, the broader Russia investigation, or both?

(3) Is it true, as reported by various media outlets, that prior to broaching the subject of the Flynn affair with you, the president asked others present — including the vice president — to leave the room?  Did this request strike you as an attempt at secrecy, or a less sinister effort to facilitate a so-called “heart-to-heart”?

(4) How would you characterize the president’s tone at the time, and how did you interpret his remarks to you?  Did you believe he was ordering you to shut down the investigation?  Or was his approach closer to friendly cajoling, as in, ‘gosh, I’d be great if this mess doesn’t bring down my friend, who’s really a good guy’?  In terms of ethics and the law, does that distinction matter?

(5) Regardless of the context and your instincts about the president’s intent, did you contemporaneously believe that his appeals were a form of inappropriate pressure?  If you believed the president was acting inappropriately, why did you not………

Ahead of Thursday’s Anticipated Hearings, A Dozen Questions for James Comey – Guy Benson