It’s being reported that The Teamsters Union drivers did not show up, with only about 20% of them arriving to help with relief efforts. If this is to be believed. As always, we post you decide.

…They have the generators, water, food, medicine, and fuel on the ground, yet the supplies are not moving across the island as quickly as they’re needed.

“It’s a lack of drivers for the transport trucks, the 18 wheelers. Supplies we have. Trucks we have. There are ships full of supplies, backed up in the ports, waiting to have a vehicle to unload into. However, only 20% of the truck drivers show up to work. These are private citizens in Puerto Rico, paid by companies that are contracted by the government”.. (link)

It’s also being reported that the union is not allowing drivers to remove goods from the port. 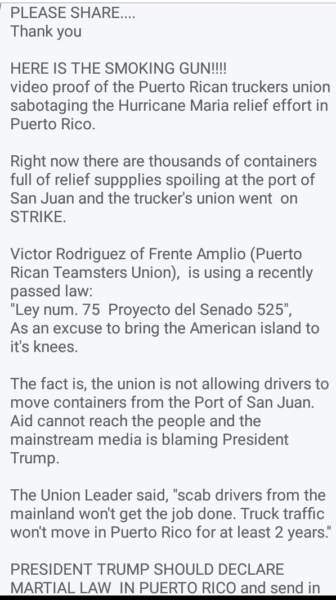 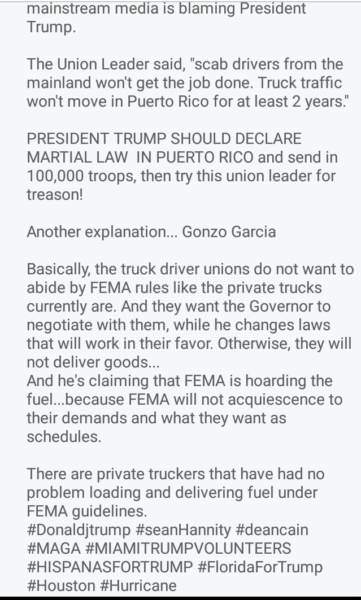 The ULTIMATE irony from Leftists is their CLAIM that all their acts– their tantrums, disruption of life of the forgotten man and woman are TO HELP people! But the naked truth about Leftists… it’s not about helping anyone except promoting their failed belief systems and making others suffer out of either pettiness or just being plain old sociopaths!

We see that clearly in Puerto Rico by the Mayor and the local PR ALFCIO!

US MILITARY ON PUERTO RICO: “THE PROBLEM IS NOT FEDERAL, IT’S LOCAL DISTRIBUTION” https://t.co/SvSyYRcelx via @HuffPostBlog

Big number of semis now pulling out of Port of San Juan — this was the relief bottleneck for Puerto Rico. https://t.co/xIj5J2T5vJ

Does this mean that actual relief efforts are finally underway?