OK so you all know by now that Donald Trump JR released his emails after a meeting he had with Veselnitskaya where he says they met because she may have had dirt on Hillary, to which she’s denied for some reason. This is what prompted him to release his emails because… well, he may be in some hot water over it.

But ever vigilant are we, the right, that someone somewhere among us will track down the truth.

And that truth, folks, is that this may have been a setup. GASP! WHAT?! Oh yes… Just says after the meeting, Veselnitskaya was spotted with Former President Obama’s Russian Ambassador.

This speaks VOLUMES to many things but among them that Donald Trump JR may have been setup.

Here’s a photo from the same session but another angle: 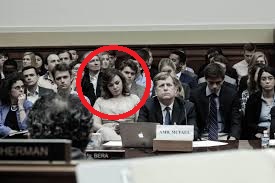 As written for TheGatewayPundit by Jim Hoft:

Veselnitskaya told NBC News on Monday she was not with the Kremlin as was reported by The New York Times.

She confirmed her meeting with Donald Trump Jr. was about Russian adoptions in the US.

The law firm where Veselnitskaya is listed as managing partner, Kamerton Consulting, is based in a Moscow suburb and does not even have a website.

A staff member at Kamerton told The Associated Press Veselnitskaya was unavailable for comment on Monday.

Her office in Moscow may be a shell. There is no working phone, email or website.

Russian President Vladimir Putin’s spokesman Dmitry Peskov said Monday that the Kremlin is unaware of a meeting between Trump’s senior staff and Veselnitskaya and “does not know who that is.”

Peskov said, “No, we don’t know who that is and obviously we can’t monitor all meetings Russian lawyers hold both in Russia and abroad.”