Weinstein Had A “Hit List” To Suppress Harassment Claims

Just in case anything ever came about from his misdeeds, Hollywood mogul and swamp leader Harvey Weinstein, allegedly kept a “hit list” of 91 women he gave his private investigators, among others, to sort of keep them “in check” should they decide to ever come forward.

So if true and you probably already realized this, it’s not a “sex addiction” problem — he knew exactly wth he was doing to these women.

As reported by Mark Townsend for The Guardian:

The Observer has gained access to a secret hitlist of almost 100 prominent individuals targeted by Harvey Weinstein in an extraordinary attempt to discover what they knew about sexual misconduct claims against him and whether they were intending to go public.

The previously undisclosed list contains a total of 91 actors, publicists, producers, financiers and others working in the film industry, all of whom Weinstein allegedly identified as part of a strategy to prevent accusers from going public with sexual misconduct claims against him.

The names, apparently drawn up by Weinstein himself, were distributed to a team hired by the film producer to suppress claims that he had sexually harassed or assaulted numerous women. 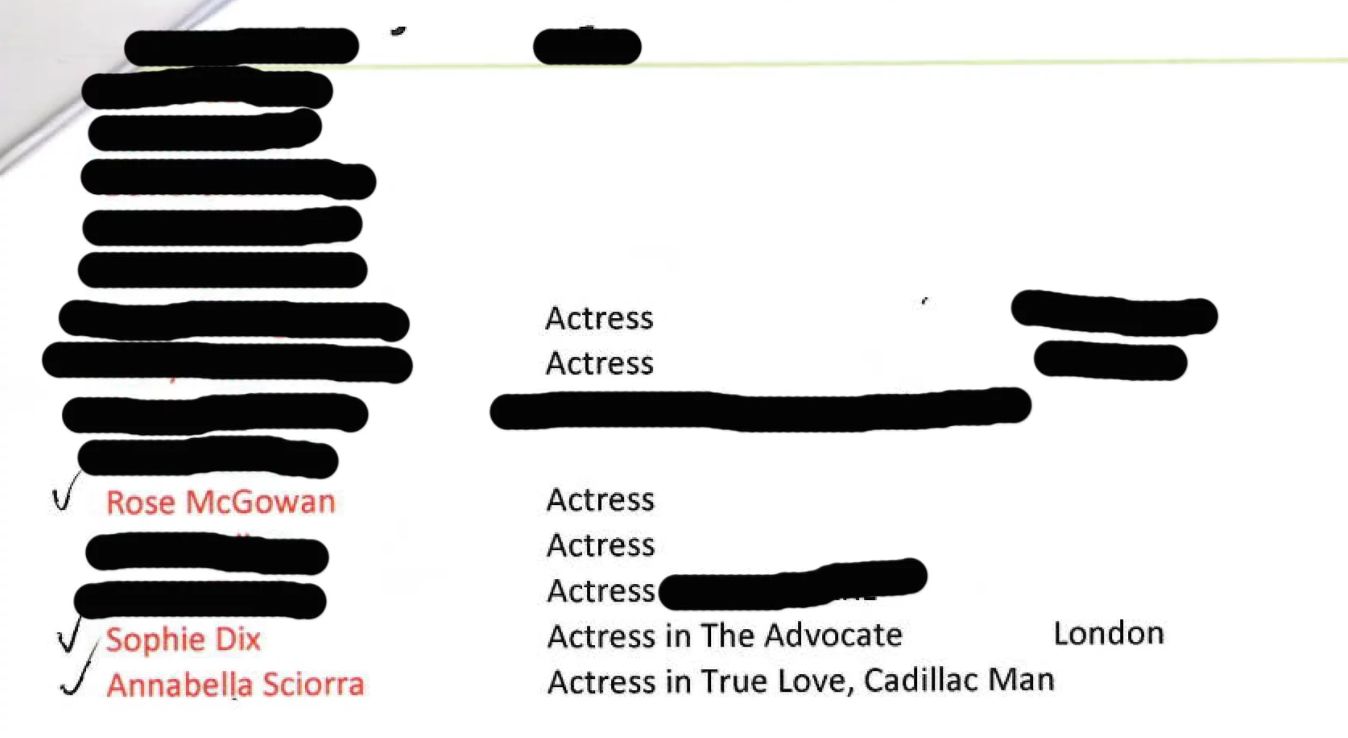 The document was compiled in early 2017, around nine months before the storm that blew up on 5 October when the New York Times published a series of sexual harassment allegations against Weinstein.

Individuals named on the list were to be targeted by investigators who would covertly extract and accumulate information from those who might know of claims or who might come forward with allegations against the film producer. Feedback was then to be relayed to Weinstein and his lawyers.

The size of the list – 85 names appear on one document, with an addendum identifying another six individuals – appears to corroborate claims that sexual misconduct allegations against the 65-year-old were an open secret throughout Hollywood.

Prominent stars were among the first tranche of individuals on the list to testify publicly against Weinstein. Among those named were the actress Rose McGowan, who days after speaking out accused the producer of raping her. Another was Laura Madden, who told how Weinstein pestered her for massages at hotels in Dublin and London, beginning in 1991. McGowan and Madden were among the first to speak out against Weinstein last month.

A typed note on the document appears to suggest that by February 2016, Madden had already been targeted by one of Weinstein’s hired investigators. Her view of the producer is, says the note, “very bitter”.

Another name is Zelda Perkins, a London-based production assistant for Weinstein’s Miramax film company, who left the firm’s London offices on Brewer Street in Soho in 1998 after, she says, enduring years of sexual harassment by her boss. Last month Perkins revealed that she had broken a confidentiality agreement to describe alleged sexual harassment by the Hollywood producer.

Also on the list is the English actress Sophie Dix, who has described how her career trajectory was “massively cut down” after an alleged sexual assault by Weinstein in a London hotel and who was among the first to come forward.