Rishard Matthew, of the Tennessee Titans, threatened to quit on his team and the NFL if rules are added that force players to stand during the national anthem.

In a now-deleted tweet, he wrote: “No I will be done playing football,” when asked if he’d be willing to face the consequences of his actions should the rule be added. 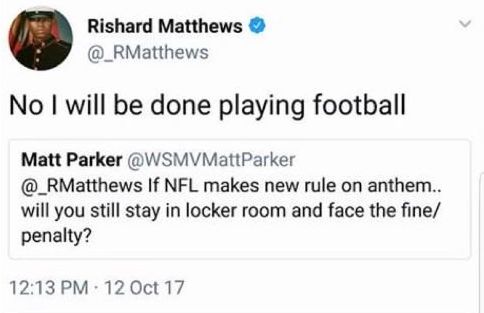 It’s risky, to say the least… I mean what happens if the NFL pulls through and essentially calls his bluff? Is he really going to be out? Is it just posturing?

This comes on the heels of the NFL #TakeAKnee protest during the national anthem.

Former 49ers quarterback Colin Kaepernick started this back in 2016 when he decided to kneel during the pre-game national anthem saying “I am not going to stand up to show pride in a flag for a country that oppresses black people and people of color. To me, this is bigger than football and it would be selfish on my part to look the other way. There are bodies in the street and people getting paid leave and getting away with murder.”

Since then, and especially since President Donald Trump was elected, more and more NFL players have decided it’s a good idea to show their protest in this fashion. There have been some consequences with the likes of sponsors and such but ultimately the NFL commissioner is considering implementing a rule to require players to stand for the anthem.

It all happened slowly, until it all happened quickly. “Last week across the entire NFL,” the Associated Press reported, “only four players knelt or sat, and two stood with their fists raised. In the nine early games Sunday, AP reporters counted 102 players kneeling or sitting, and at least three raising their fists.” (Later in the day, the AP modified its estimate to “more than 130.”)