Cher had better watch out as she could become an outcast to the Democrat party. Her reaction to two recent stories were downright….conservative. The truth is that she came to the right conclusion on illegal immigration.

Saying we shouldn\’t be taking in migrants when we aren\’t taking care of the homeless. Her latest protest against Democratic policy is the fact that Bernie Sanders says that every person in prison should be allowed to vote, including the Boston Bomber. How badly does President Trump want to run against Bernie?

Later in the day, Kamala Harris said we need to look at allowing inmates to vote, no matter the crime.

Pop icon Cher questioned the wisdom of Sen. Bernie Sanders’ (I-VT) recent declaration that felons, even terrorists, should have the right to vote. 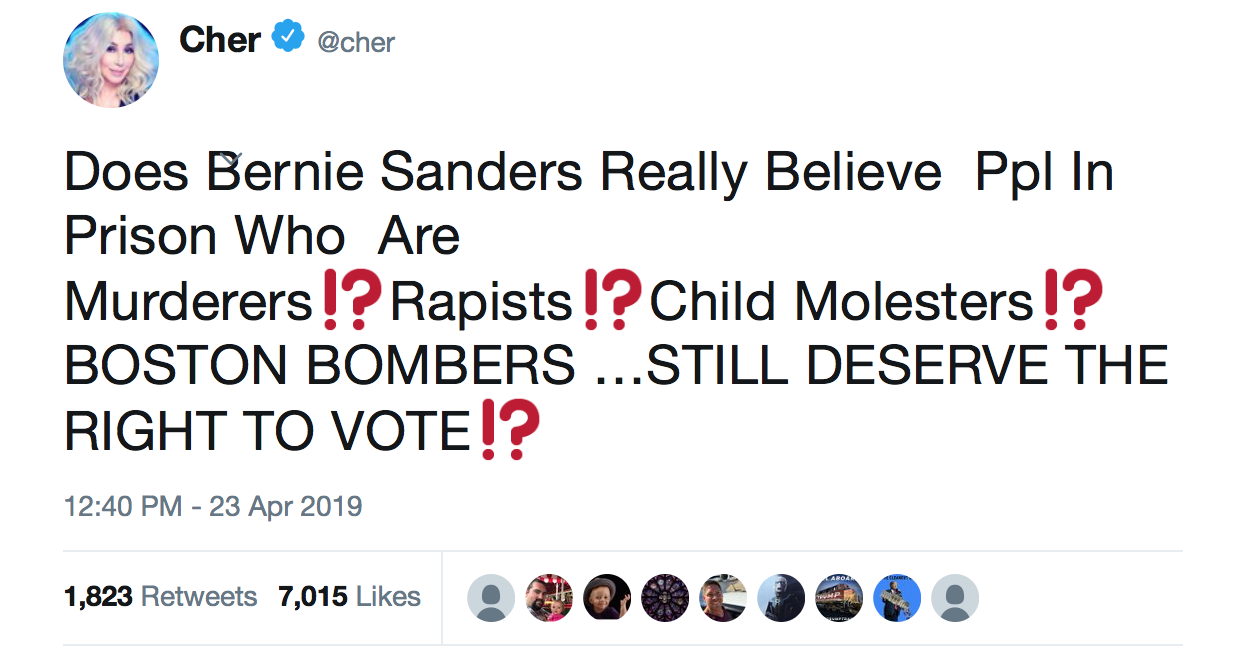 Bernie Sanders voiced his belief that felons should not be deprived of a right to vote earlier this month. During a CNN town hall Monday night, Sanders was again asked about his position by host Don Lemon.

“Yes, even for terrible people because once you start chipping away — you say, ‘That guy committed a terrible crime, we’re not going to let him vote,’ or ‘that person did that,’ you’re running down a slippery slope,” the socialist candidate said. “So, I believe people who commit crimes, they pay the price and they get out of jail, they certainly should have the right to vote…I believe even if they are in jail, they’re paying the price to society, but that should not take away their inherent American right to participate in our democracy.”

Cher’s political opinions are usually that of a typical Hollywood liberal, and she has frequently shared deranged fantasies like President Donald Trump being placed in a “straight jacket.”