Heather Lind, an actress, has accused former president George H.W. Bush of “sexual harassment” which took place years ago when the president was chairbound and 91 years old.

She stated that he “patted her rear end” and followed it up with a dirty joke.

His spokesman this week stated: “President Bush would never — under any circumstance — intentionally cause anyone distress, and he most sincerely apologizes if his attempt at humor offended Ms. Lind.”

He further stated: “On occasion, he has patted women’s rears in what he intended to be a good-natured manner. Some have seen it as innocent; some clearly view it as inappropriate. To anyone he has offended, President Bush apologizes most sincerely.” 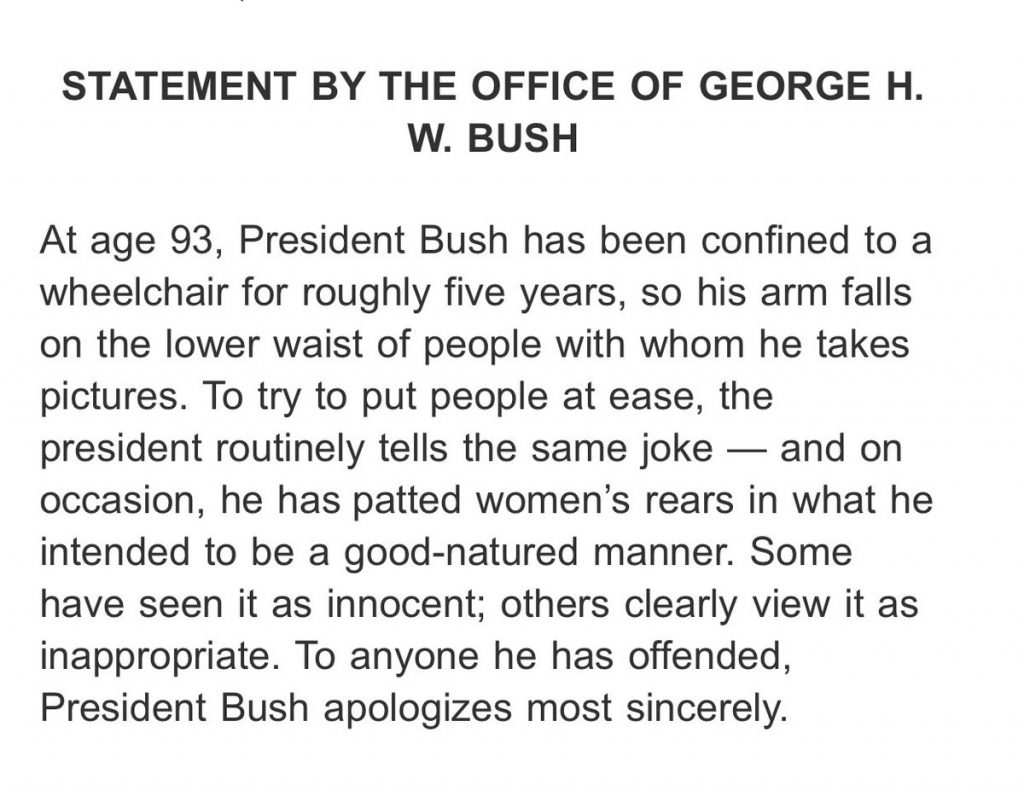 In her accusation, made on Instagram, which she later deleted, Lind wrote:

I was disturbed today by a photo I saw of President Barack Obama shaking hands with George H. W. Bush in a gathering of ex-presidents organizing aid to states and territories damaged by recent hurricanes. I found it disturbing because I recognize the respect ex-presidents are given for having served. And I feel pride and reverence toward many of the men in the photo. But when I got the chance to meet George H. W. Bush four years ago to promote a historical television show I was working on, he sexually assaulted me while I was posing for a similar photo. He didn’t shake my hand. He touched me from behind from his wheelchair with his wife Barbara Bush by his side. He told me a dirty joke. And then, all the while being photographed, touched me again. Barbara rolled her eyes as if to say “not again.”

His security guard told me I shouldn’t have stood next to him for the photo. We were instructed to call him Mr. President. It seems to me a President’s power is in his or her capacity to enact positive change, actually help people, and serve as a symbol of our democracy. He relinquished that power when he used it against me and, judging from the comments of those around him, countless other women before me. What comforts me is that I too can use my power, which isn’t so different from a President really. I can enact positive change. I can actually help people. I can be a symbol of my democracy. I can refuse to call him President, and call out other abuses of power when I see them. I can vote for a President, in part, by the nature of his or her character, knowing that his or her political decisions must necessarily stem from that character. My fellow cast-mates and producers helped me that day and continue to support me. I am grateful for the bravery of other women who have spoken up and written about their experiences. And I thank President Barack Obama for the gesture of respect he made toward George H. W. Bush for the sake of our country, but I do not respect him.
#metoo