Many donations and volunteers are coming in droves to help the people of Texas deal with the aftermath of the devastation brought on by Hurricane Harvey, it’s truly a testament to the good nature of the American people… when the going gets tough, we come together! Now… one charity has crossed a line as they are seeking donations for something I can’t even believe they would consider putting a thought toward during a time like this… 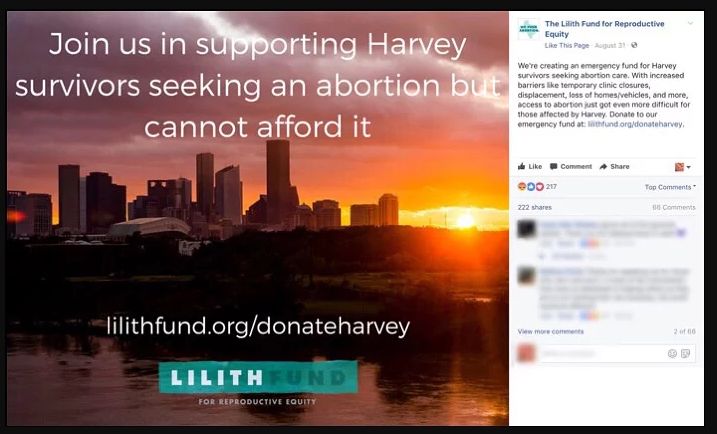 Seriously.. at a time like this… these people are focused on freaking ABORTIONS! GIVE ME A BREAK! Can we not, at least, get people back on their feet first? Living and working? Seriously? Crap like this should be labeled alt-left, too. Who in their right mind would make this the focus of their “charitable face”, you know?

As reported by National Review:

The National Network of Abortion Funds, NARAL Pro-Choice Texas, and the Women’s March, along with left-wing activists, quickly voiced support for the fund as an important way to help those affected by Harvey. One conservative pundit put it perfectly on Twitter, saying that a donation to the Lilith Fund “is a great investment if you think the biggest problem with Harvey is that it didn’t kill enough people.”

One conservative pundit put it perfectly on Twitter, saying that a donation to the Lilith Fund “is a great investment if you think the biggest problem with Harvey is that it didn’t kill enough people.”

This unconscionable fund is the latest evidence that abortion-rights activists will use every imaginable excuse to fundraise for and promote abortion. Planned Parenthood conducts a rather ironic fundraising push on Mother’s Day each year, without a hint of self-awareness. NARAL and the Women’s March are already busy casting Labor Day as a time to reflect on the fact that “the fight for reproductive freedom and the fight for workers’ rights go hand in hand.”