But I will reveal some things you may not know about Barack Obama’s boss. I guess the best place to start would be in Chicago.

In 1992, Jarrett joined a real estate investment firm called Habitat Company, founded by Daniel Levin. Levin and his wife, Fay Hartog Levin, have contributed 1 million dollars to democrats since 1989. This includes 25,000 dollars each from Levin and his wife to Obama. Coincidentally, Fay was appointed by Obama to be the ambassador to The Netherlands. (I wonder if she brings Obama’s choom from Amsterdam in her diplomatic pouch) Habitat Company has a long and storied history of being one of Chicago’s foremost slumlords. 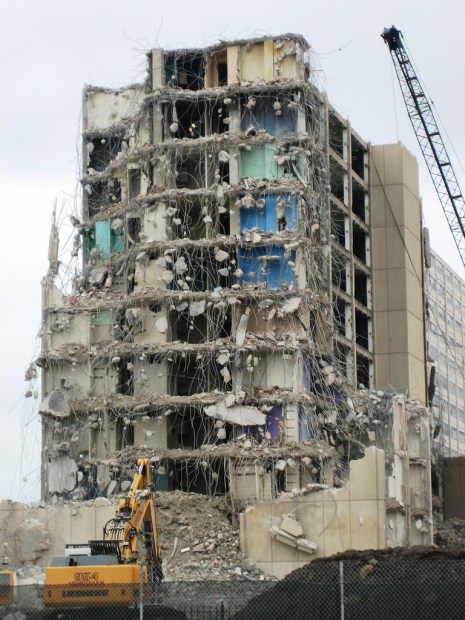 The Cabrini Green Neighborhood is a first class example of this.  It has been described as the perfect example of urban decay. Valerie Jarrett ran this project as head of Habitat Company. A 2003 Harvard Law Revue article described it as an example of what happens when public housing is privatized.

In 1997, part of the area was designated as a blighted area and thousands of tenants were displaced and sent to even worse housing.

In addition, in another Habitat Company property, Grove Parc, which was a federally subsidized housing project, more aptly described as a slum, HUD had to use your tax dollars, 30.1 million to be exact, to tear the entire complex down and rebuild it in 2011.

Valerie Jarrett also ran Chicago Hospital. Under her leadership, an employee incorporated a policy of patient dumping. That employee’s name was Michelle Obama. Her assistant was one David Axlerod. Chicago Hospital is a public hospital, therefore they are obligated to provide emergency services, regardless of the person’s ability to pay. Michelle began redirecting the poor to local free clinics and hospitals of questionable quality.

From The American Thinker

Oddly absent from most of the unflattering press coverage of UCMC’s patient-dumping scheme is any mention of the role our new First Lady played in devising the program. A laudable exception has been the Chicago Sun-Times, which reported last August that “Michelle Obama — currently on unpaid leave from her $317,000-a-year job as a vice president of the prestigious hospital — helped create the program.”
On the rare occasions when other “news” media have bothered to connect the Urban Health Initiative to its glamorous creator, they have attempted to whitewash this tawdry program. Typical of such disingenuous coverage was a story in the Washington Post, which described it as “an innovative program to steer the patients to existing neighborhood clinics.”
Another interesting coincidence is the day that Barack Obama won a seat in the US Senate, Valerie Jarrett gave Michelle a raise from $121,910 dollars a year in 2004 to $316,962 dollars in 2006. Coincidentally, Obama put in for a 1 million dollar earmark for a new pavilion at Chicago Hospital. I am almost positive the two actions were not related. (choke choke)

Since entering the White House, Jarrett has continued to draw attention due to the controversy she brings wherever she goes. It’s no secret that she is the de facto Chief of Staff as witnessed by Bill Daley and Rahm Emanuel after they were thrown off and under the bus after an altercation with Jarrett. We also know that three times, she talked Obama out of giving the order to kill Osama Bin Laden. The real courageousness of Obama’s decision was to buck Jarrett. Bin Laden was a pushover.

We have also found out recently that Jarrett has an enemies list and that during meetings she will intimidate staffers and advisers by allowing them to see their name is on her list. Her staff claims the enemies list was written by a staffer and that Jarrett had nothing to do with it. Really? Jarrett knew nothing of the list? So how did she come to carry that list into the meetings and why was she holding it in her hands?

While neither Obama nor Clinton could be found, who sat in the situation room as the Benghazi attack was occurring? Valerie Jarrett. The question is why was she there and did she make any decisions that by law, only the president can make? We’ll never know the answer to that question.

You have to wonder if Obama ever gets indicted for his crimes, whether he would be able to plea bargain by naming higher ups such as Jarrett and George Soros.