According to sources and leaked reports, the Department of Justice may have been conducting an on-going investigation of the FBI for at least the last 11 months.

WHAT?! Call it what you will… for now let’s say speculation but this is pretty major. Trump promised us big things in his first year, draining the swamp so-to-speak… let’s see what happens! Except… there’s a rather interesting link to an official document from the DOJ website below…

Given the nature of the leaked IG investigation to the Washington Post and New York times; surrounding apex investigator and deputy head of counterintelligence at the FBI Peter Strzok; and accepting the direct approach of President Trump in his tweets toward that revelation; and adding the layer of Intel Chairman Devin Nunes threatening to file ‘contempt of congress charges‘; there is every indication something is about to break – very soon.

“[The allegations] if proven to be true, would raise serious questions of public trust. I look forward to receiving the Inspector General’s report. We will ensure that anyone who works on any investigation in the Department of Justice does so objectively and free from bias or favoritism.”

“My job is to restore confidence in the Department of Justice in all aspects of our work and I intend to do so. As such, I have directed that the FBI Director review the information available on this and other matters and promptly make any necessary changes to his management and investigative teams consistent with the highest professional standards.”

“When the FBI first learned of the allegations, the employees involved were immediately reassigned, consistent with practices involving employee matters.”

“The January 2017 statement issued by the Department of Justice Office of the Inspector General (OIG) announcing its review of allegations regarding various actions of the Department of Justice and the Federal Bureau of Investigation in advance of the 2016 election stated that the OIG review would, among other things, consider whether certain underlying investigative decisions were based on improper considerations and that we also would include issues that might arise during the course of the review.

The OIG has been reviewing allegations involving communications between certain individuals, and will report its findings regarding those allegations promptly upon completion of the review of them.”

Still in doubt? Well here’s a file directing from justice.gov about this investigation.

“Department of Justice Inspector General Michael E. Horowitz announced today that, in response to requests from numerous Chairmen and Ranking Members of Congressional oversight committees, various organizations, and members of the public, the Office of the Inspector General (OIG) will initiate a review of allegations regarding certain actions by the Department of Justice (Department) and the Federal Bureau of Investigation (FBI) in advance of the 2016 election. Cognizant of the scope of the OIG’s jurisdiction under Section 8E of the Inspector General Act, the review will examine the following issues:”

“Allegations that Department or FBI policies or procedures were not followed in connection with, or in actions leading up to or related to, the FBI  director’s public announcement on July 5, 2016, and the Director’s letters to Congress on October 28 and November 6, 2016, and that certain underlying investigative decisions were based on improper considerations;”

“Allegations that the FBI Deputy Director should have been recused from participating in certain investigative matters;”

“Allegations that the Department’s Assistant Attorney General for Legislative Affairs improperly disclosed non-public information to the Clinton campaign and/or should have been recused from participating in certain matters;”

“Allegations that decisions regarding the timing of the FBI’s release of certain Freedom of Information Act (FOIA) documents on October 30 and November 1, 2016, and the use of a Twitter account to publicize same, were influenced by improper considerations.”

“The review will not substitute the OIG’s judgment for the judgments made by the FBI or the Department regarding the substantive merits of investigative or prosecutive decisions. Finally, if circumstances warrant, the OIG will consider including other issues that may arise during the course of the review.” 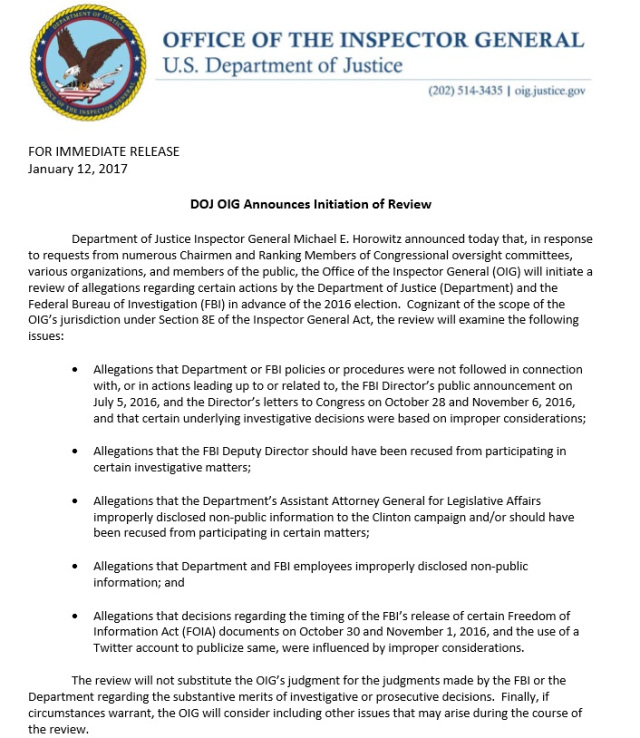 It seems the DOJ-OIG is close to “reporting its findings.” This could explain a lot about the direction of POTUS’ tweets and the headlines regarding the DC spectrum.

That said, why is this as far as the investigation has gotten? What are they sitting on?