Mainstream media outlets and others used the FOIA (Freedom of Information ACT) in order to find out what the Las Vegas police were hiding about the case of Stephen Paddock, the Las Vegas shooter, who killed  58 and wounded another 546, and what they found out could be explosive.

Documents from the feds indicate Paddock did not act alone. It includes Paddock’s girlfriend,  Marilou Danley, and others yet unknown. It turns out Danley told police that her fingerprints could be on the bullets and guns because “she helped him load the guns in the past.

The document also explains that there was “probable cause” and cited the following violations A through D: 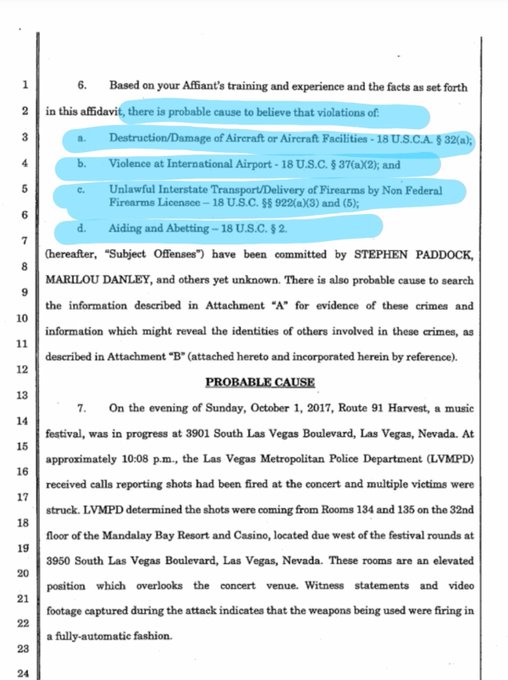 “Subject offenses have been committed by Stephen Paddock, Mary Lou Danley, and others yet unknown.” pic.twitter.com/J0mPA1HpSO

BREAKING: Unsealed @FBI search warrants of #StephenPaddock‘s devices suggest there was an ACCOMPLICE in the #LasVegasShooting.

“Investigators believe these communications may have been related to the eventual attack @MandalayBay.” pic.twitter.com/HMR4WxPXQK

BREAKING: Unsealed @FBI search warrants of #StephenPaddock‘s devices suggest there was an ACCOMPLICE in the #LasVegasShooting.

“Investigators believe these communications may have been related to the eventual attack @MandalayBay.” pic.twitter.com/HMR4WxPXQK

Since we are just now learning that #StephenPaddock had at least 7 cell phones, which one did Mary Lou Daley call him on, and who was he calling on the other 6+ cell phones investigators discovered? #LasVegasShooting

So, who was he communicating with on those seven phones he had on him during his shooting spree? Inquiring minds want to know.