How can anyone fight the evils of the western world in their every day “civilian” clothes? I mean… I can’t even!

Good news, alt-lefters! Barneys of New York has got you covered… literally! They’ve introduced a new jacket called the “M-65 Anarchy” which is military inspired and totally meant to emphasize the Antifa movement.

This piece of must half anti-capitalism fashion can be yours for the “reasonable” price of $375! 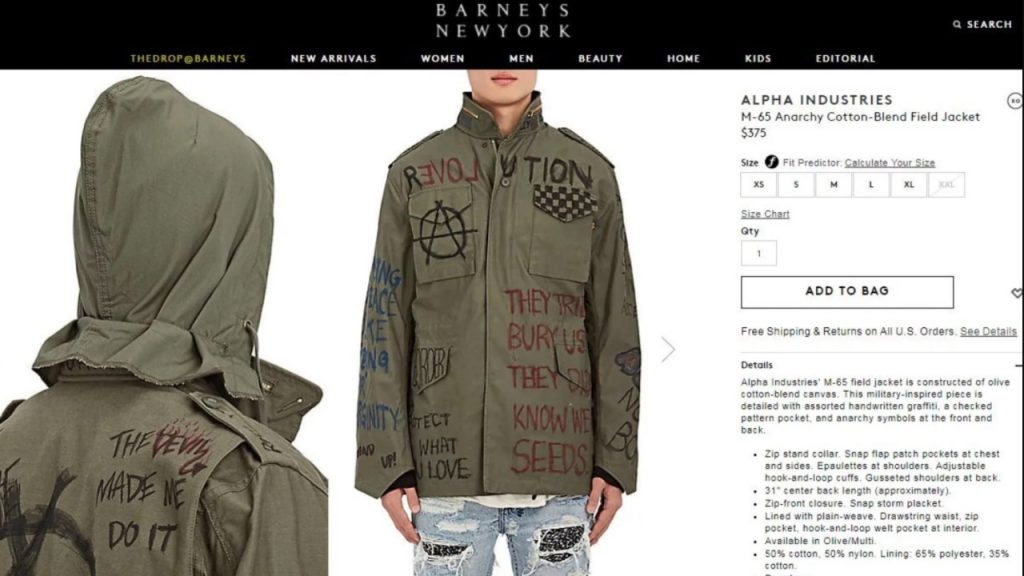 Ultimately, one could view this as the beginning of the end of the Antifa movement but fret not… another will step up to take its place soon. But much like the allure of Starbucks and it’s cutting edge symbolism, so too will Antifa be nothing more than hipster-life. And that will cause those “dedicated to the cause” to flee in terror.

As reported by Emily Zanotti for The Daily Wire:

The jacket appeared on social media Saturday during the nationwide “Resistance Marches” (that were mostly “Resistance gatherings of approximately 100 people”), and was, of course, roundly mocked and derided as “undoubtedly fake.” After all, it’s emblazoned with incredibly obvious slogans, a couple of hastily-drawn “anarchy” symbols and a punk checkerboard motif from the early 1990s. It’s trying just a little too hard.

It turns out, though, that the jacket is very, very real, and still available on the Barneys New York website.

Alpha Industries, the jacket’s manufacturer, is a longtime supplier to the U.S. military, and unsurprisingly, they told the Daily Dot they were trying to sell the mystique of Antifa to all those Millennials whose progressive politics are little more than skin deep.

“We have seen resistance to power and authority become a trend in our current pop culture and society, often expressed through fashion,” a spokeswoman for Alpha Industries said. “Since 1965 the M65 field jackets have been a favored method to graphically express one’s opinion. We developed the Barneys M65 anarchy jacket to encompass the artistic and graphic expressions of individuality.”