Kayla Moore, wife of Senate-Hopeful and alleged creeper Roy Moore, needs to stop what she’s doing on social media in regards to the allegations against her husband.

I know, it’s seemingly great that she’s helping and that she has her back but apparently she’s spreading false information. I’ll admit it. probably a bit unknowingly, just looking to be supportive, but it’s not helping his cause and his fight against what’s been levied against him.

Other media outlets seem to think it’s more notorious than that, even claiming she’s using the “kitchen sink” approach and is trying to spread false and misleading information in the hopes of discrediting her husband’s accusers… I won’t go there. I’ll let other people but I won’t go there. 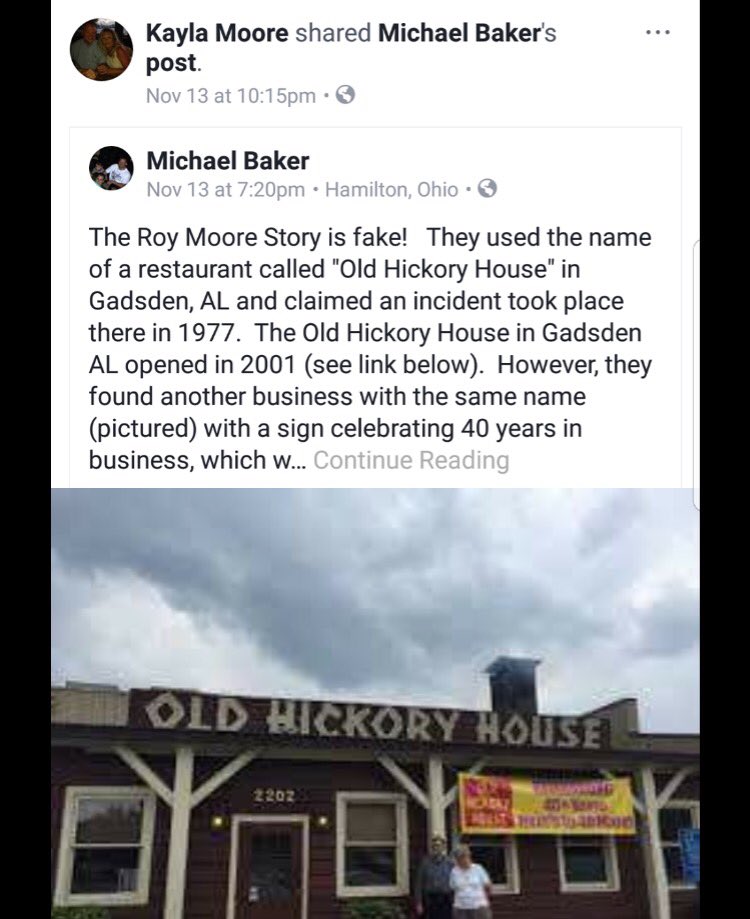 As reported by Guy Benson for Town Hall:

I spent several hours today tracking down one key piece of verifiable information related to this case.  Mrs. Moore shared a post on Facebook claiming that the Olde Hickory House restaurant, where Beverly Young said she worked as a waitress, did not exist in 1977.  It opened in 2001, the post asserted.

If this were true, Young’s entire story would fall apart, considering that the eatery was the location where she says she met Moore (she says was he a regular client; he claims he doesn’t know her or the restaurant), where he is said to have signed her high school yearbook, and where he allegedly attempted to sexually assault her in the parking lot.

Simple question: Did the restaurant exist where and when Young says it did, or have Moore’s allies found a smoking gun?

I conducted web searches, exchanged messages with potential sources, and placed multiple phone calls to city and county officials, the public library, and local media publications.  After digging around, several people told me they thought they remembered the restaurant, which they believed was open many years ago (well before 2001), but they couldn’t say for sure.

I was also told that the public records I sought only started being stored in digital form in the early 2000’s, so any official information would only be retrievable in hard copy or on microfilm.  I was finally connected with a local journalist who’d been chasing the same set of facts.  After all, if the post Mrs. Moore highlighted was accurate, it would be a major blow to the case against Moore, as the most serious allegations from the most recent accuser would go up in smoke.

But if turned out that she was once again engaged in reckless, fact-free, say-anything damage control, it would buttress Ms. Young’s credibility and make the Moore camp look frantic and guilty.  Here is the verdict, courtesy of two local reporters.  Based on a 1978 city directory, which listed local businesses from the previous year, the Olde Hickory House restaurant was in operation at that location in 1977, just as Young said: