There are many conflicts of interest in the Mueller investigation, heck… it could fill a book. But the latest one may be the most conflicted or at least it’s in the top two.

Last week Mueller announced he is investigating Paul Manafort for representing Ukrainian’s Leader Viktor Yanukovych in 2013. Yanukovych happens to be a close friend of Kremlin officials.

But neither Mueller nor the DOJ happened to mention that someone associated with the investigation also worked for Yanukovych in 2013.

Here is his picture: 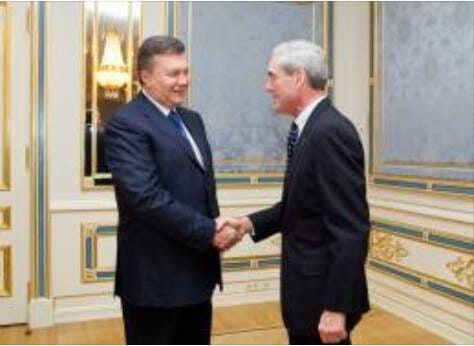 That’s right, it was that dirty cop Robert Mueller. What are the odds he will investigate his own association with the Ukrainian leader? I would guess the odds would be the same as me winning the Kentucky Derby.

Mueller must be getting really desperate to take a chance like this. Surely some smart reporter or reporters will investigate Mueller’s ties.

(Speaking of Mueller who was in attendance that day)

“We are grateful to American side for support of our efforts aimed at settlement of frozen conflicts, ensuring control over conventional arms in Europe and combating trafficking. We count on further support and cooperation with the USA within the OSCE in order to enhance stability and security in the area which is under the jurisdiction of the given organization,” the President said at the meeting with FBI Director Robert Mueller.

The Head of State reminded that since the beginning of 2013, Ukraine had been presiding in the OSCE. “We determined priorities of our presidency in close cooperation with member-states of the OSCE. I am pleased to note that we have a constructive cooperation with Washington in this sphere,” the President emphasized.

“Ukrainian-American cooperation efficiently develops in many spheres of mutual interest. Your visit is very interesting for Ukraine and relations between our law enforcement bodies have established good traditions of cooperation and communication in the course of 20 years. I am confident that there is a potential for further broadening of cooperation,” Viktor Yanukovych said.

So, who is Mueller to investigate Manafort on this?