New York Attorney General Eric Schneiderman has resigned after it was discovered that he beat, choked and threatened four different women. Schneiderman who is an avid NeverTrumper who has run through a ton of New Yorker\’s tax dollars with frivolous lawsuits against President Trump has resigned. Four women have come forward with complaints against the ultra-partisan Democrat. One woman claims that Schneiderman would slap her until she called him master. Three other women detail beatings and threats he used against them.

“Sung to the tune of Spiderman”

Does whatever a Schneider can

Spins a yarn, any size

Caught in his own disturbing lies

Is he strong?
Listen bud,
He\’s got radioactive blood.
Can he swing at her head
See the blood on the bed
Hey, there
There goes the Schneiderman

Well, you can guess the rest. 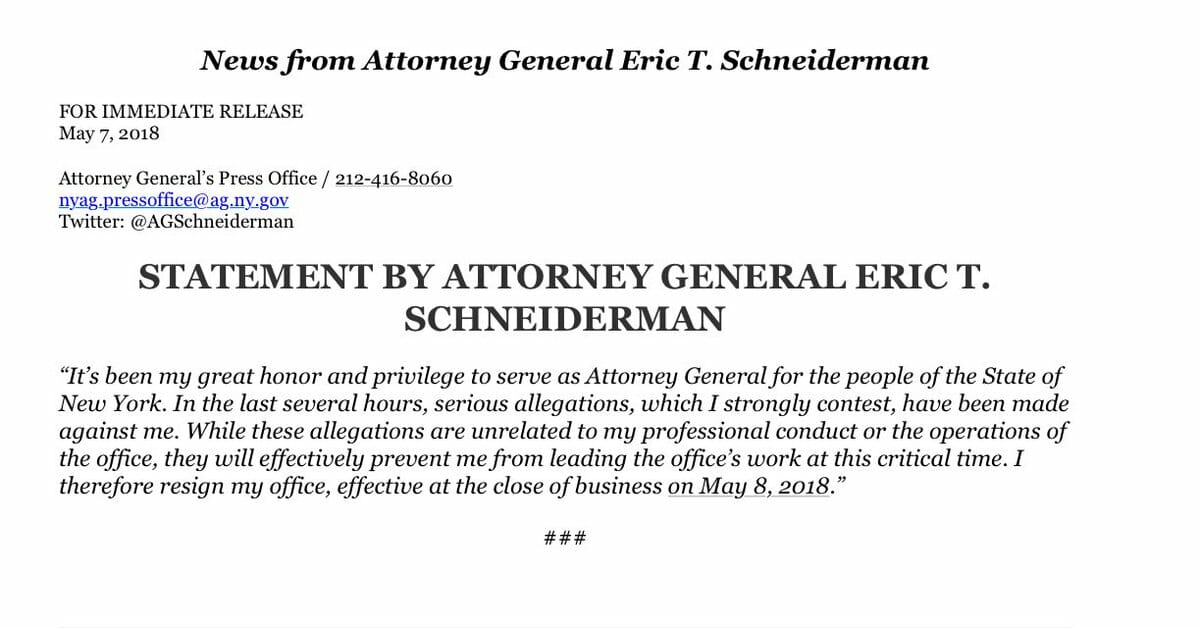 The New Yorker reported on Monday that four women are accusing Schneiderman of subjecting them to nonconsensual physical violence and threatening to kill them if they ever broke up with him, among other abusive behavior.

Michelle Manning Barish said she was in a relationship with Schneiderman for close to two years, and, apparently in a drunken rage, he allegedly called her a whore, slapped her across the face and the ear, and held her down and choked her. The slap caused lasting damage to Manning Barish’s ear and she later sought out a doctor for treatment.

Manning Barish told several friends about the incident at the time, all of whom confirmed her account to The New Yorker. She also accuses him of “emotionally battering” her and controlling her appearance through cruel remarks about her weight.

It\’s very ironic that Schneiderman who claimed that Trump is corrupt and would resign in disgrace would find himself in this predicament.

From Trump in 2013: “Weiner is gone, Spitzer is gone – next will be lightweight A.G. Eric Schneiderman. Is he a crook? Wait and see, worse than Spitzer or Weiner”

Weiner is gone, Spitzer is gone – next will be lightweight A.G. Eric Schneiderman. Is he a crook? Wait and see, worse than Spitzer or Weiner