White House counselor Kellyanne Conway took on Hillary Clinton’s “opportunism” in a single tweet, and it was pretty epic.

“It took Hillary abt 5 minutes to blame NRA for madman’s rampage, but 5 days to sorta-kinda blame Harvey Weinstein 4 his sexually assaults,” she wrote.

So the idea here is pretty simple… Weinstein was a mega-donor to Clinton’s failed bid for the Presidency and it took her d*mn-near a week to give any sort of statement on the matter. Interesting “tidbit” I don’t think she’s ever released a statement for her Husband’s behavior… 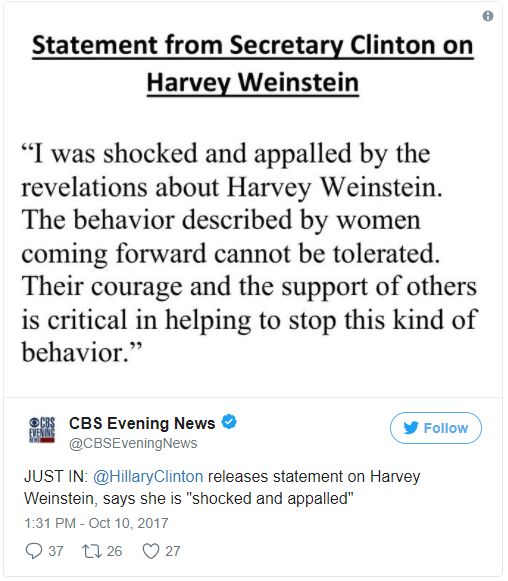 “I was shocked and appalled by the revelations about Harvey Weinstein,” Clinton said in a statement through her spokesman Nick Merrill. “The behavior described by women coming forward cannot be tolerated. Their courage and the support of others is critical in helping to stop this kind of behavior.”

In contrast, when news truly broke of the Las Vegas mass shooting Hillary Clinton penned a tweet that morning condemning the NRA, for some reason, on the attack. 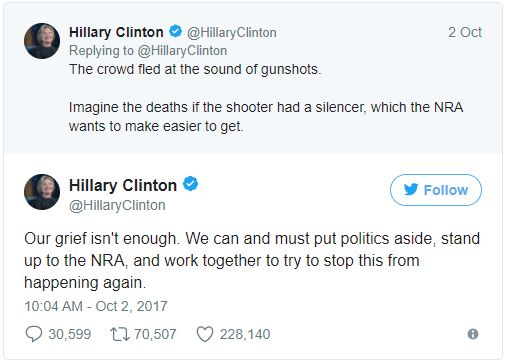 Even the Obama’s are in on the condemning of Weinstein:

“Michelle and I have been disgusted by the recent reports about Harvey Weinstein,” the statement said. “Any man who demeans and degrades women in such fashion needs to be condemned and held accountable, regardless of wealth or status. We should celebrate the courage of women who have come forward to tell these painful stories. And we all need to build a culture — including by empowering our girls and teaching our boys decency and respect — so we can make such behavior less prevalent in the future.”

Bu bu but what about in 2013 when Michelle had nothing but kind things to say about the man?

“I want to start by thanking Harvey Weinstein for organizing this amazing day. This is possible because of Harvey. He is a wonderful human being, a good friend and just a powerhouse.”

“And the fact that he and his team took the time to make this happen for all of you should say something not about me or about this place, but about you.”