We all know by now that federal judge TS Ellis tore into the Mueller team on Friday for their attempts to deceive him and to use an unrelated case to pressure Manafort to turn on Trump. A lawyer who wishes to remain anonymous received a leaked copy of the trial transcript, along with commentary.

It is apparent from the transcripts that Mueller and his Hillary contributing lawyers are trying to get an impeachment using every illegal and unethical trick in the books. They were just unfortunate to draw a judge who won\’t let them lie in order to win their case. It will be interesting to see where the case goes after the judge gets a copy of the original order creating a Special Counsel.

THE STORY: I got my hands on the May 4 transcript from the USA v. Manafort hearing in front of Judge Ellis. (Thanks to a close friend.) 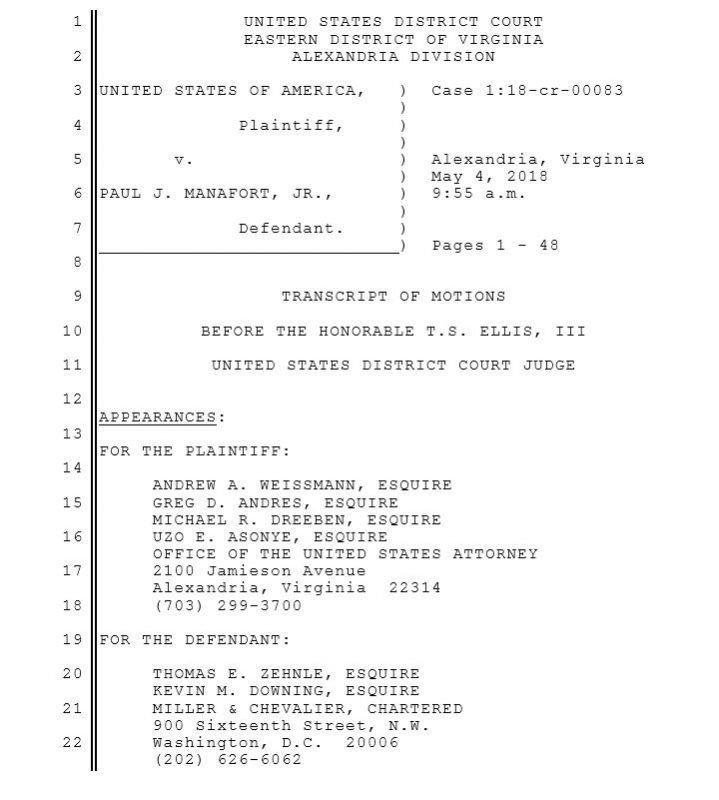 Judge Ellis immediately lays out his understanding of the Manafort case: The criminal indictment relates back to 2005, 2007, etc., that the DOJ investigation of Manafort had been going on for years. 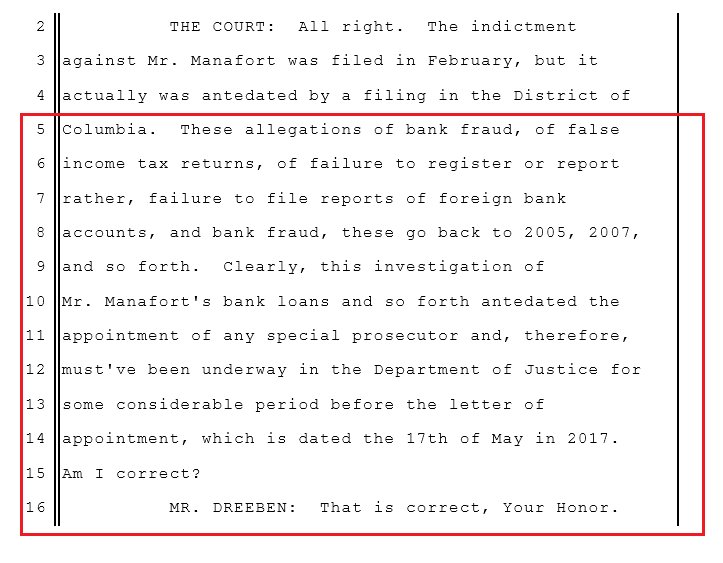 Judge: When SC was appointed, did DOJ turn over their Manafort file to you? 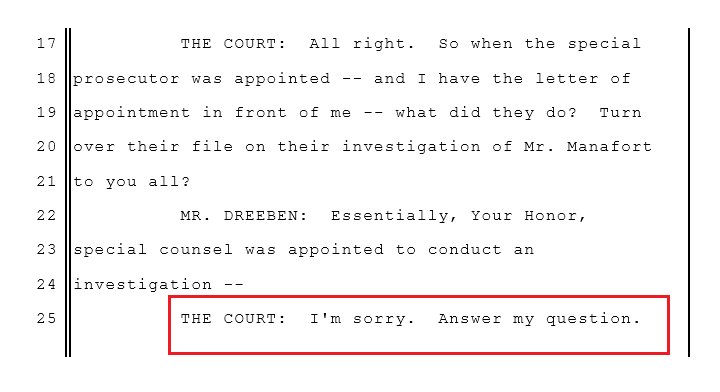 “If I look at the indictment, none of that information has anything to do with links or coordination between the Russian gov\’t and individuals associated with the campaign of Donald Trump.” 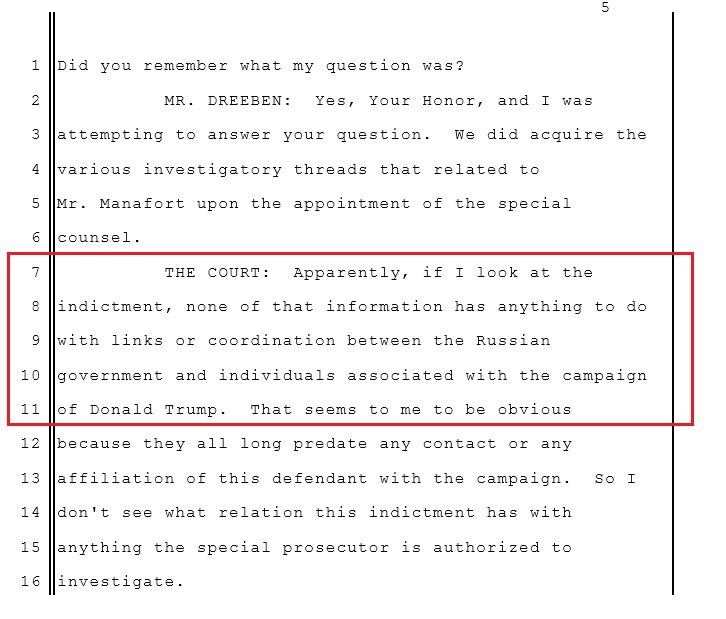 Judge Ellis recognizes what this is: an attempt by Mueller to squeeze Manafort. He likens the whole thing to a small-time drug dealer getting pinched.

“I think we out to be very clear about these facts and what is happening.” 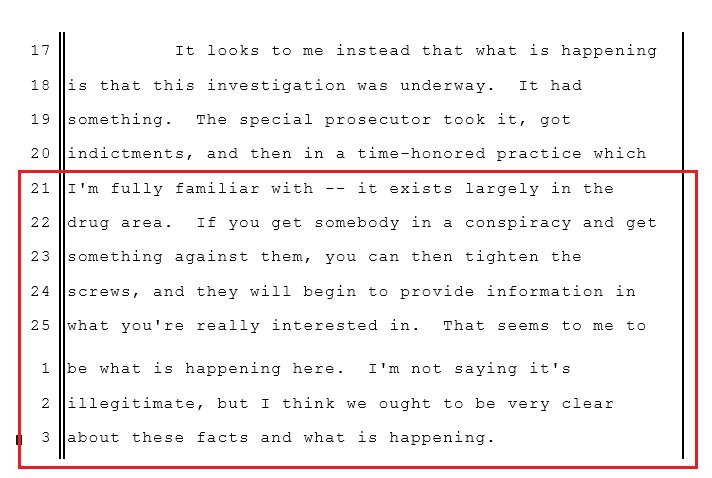 The Judge lays out his correct observation that this case is all about leverage
against Manafort.He asks the Special Counsel if that assessment is wrong.

The Special Counsel refuses to answer the question. Twice. 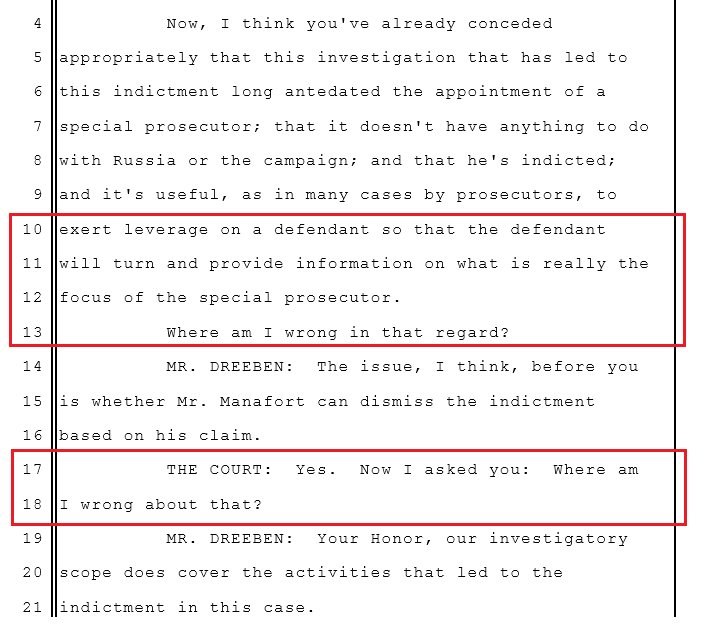 Judge: How does the 2005/2007 bank fraud have anything to do with coordination b/w the Russians and the Trump campaign?

Judge: “You\’re running away from my question again.” 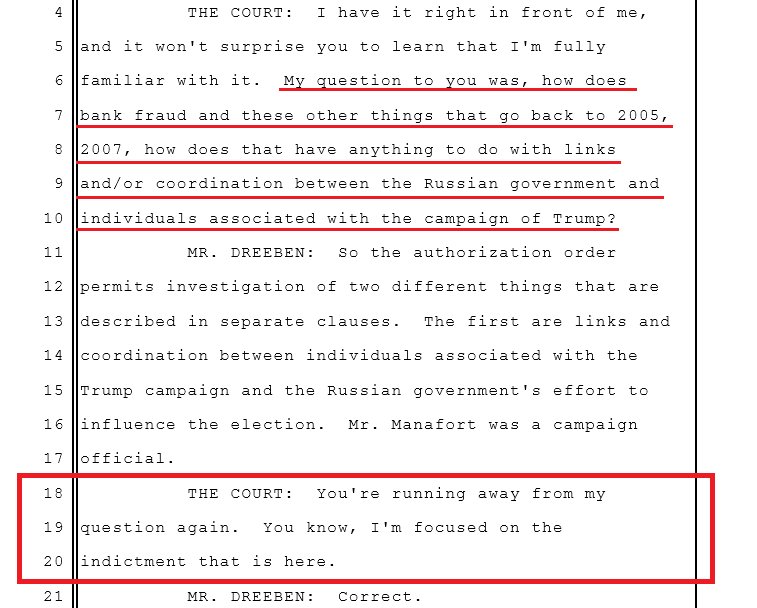 SC explains to the Judge that the indictments are w/in the scope of the SC appointment: leads from the prior DOJ case eventually contributed to and led to the indictment. 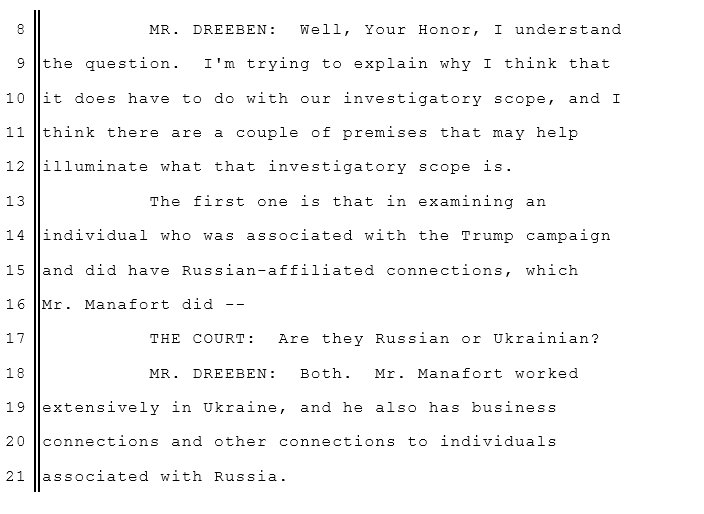 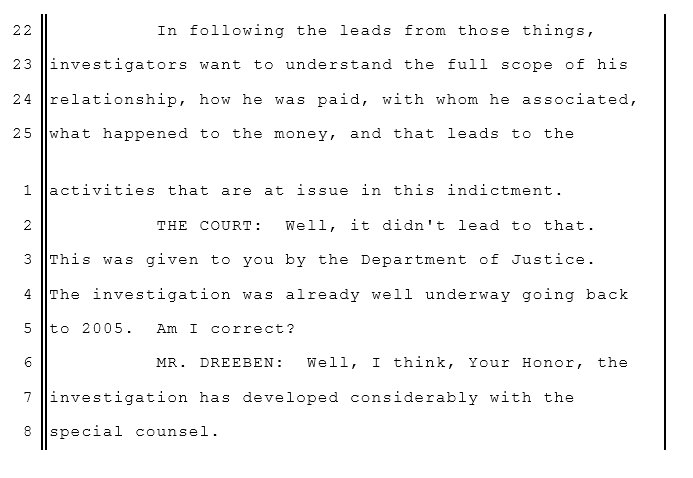 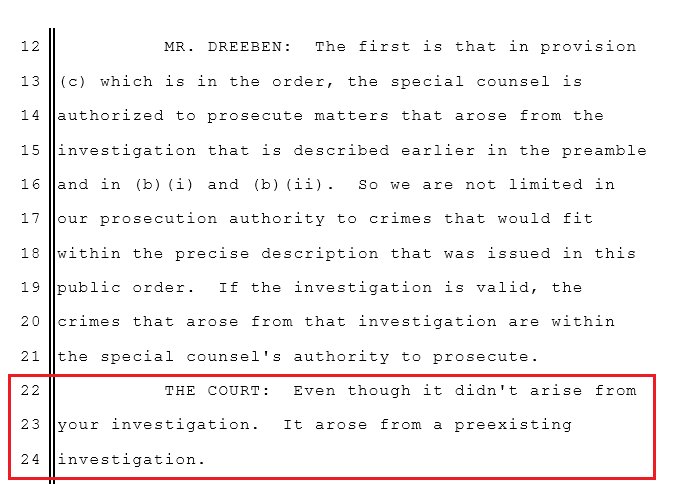 The SC is basically telling the Judge that grants of authority to the Special Counsel cannot be challenged through the courts. 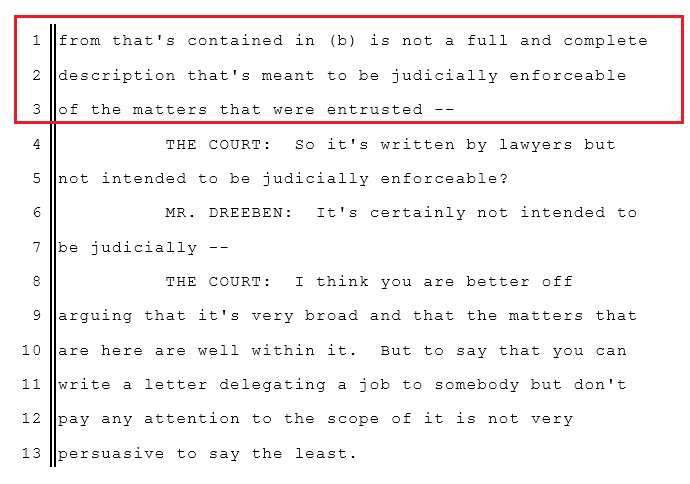 That is what elicited Judge Ellis\’s response that we don\’t want “unfettered power.”

Judge Ellis continues, saying he\’s not going to be persuaded that Mueller has “unlimited powers to do anything” Mueller wants. 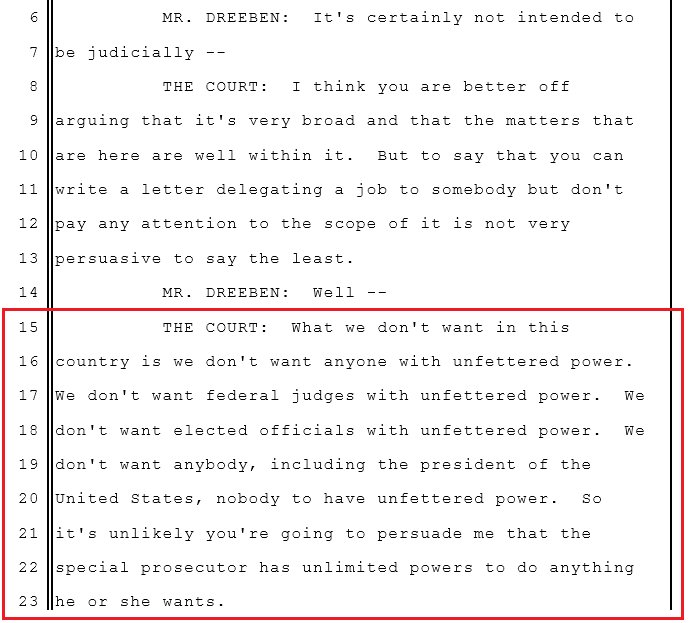 Important Q: What if the memo proves right Judge Ellis\’s suspicions about the SC being a means to impeachment?

Eventually the SC sits down and it\’s Manafort\’s lawyer\’s turn.

Judge Ellis to Manafort\’s lawyer: Does the 8/2 memo remedy any issue with Mueller\’s jurisdiction?

Manafort\’s lawyer: No. It can\’t retroactively be remedied. 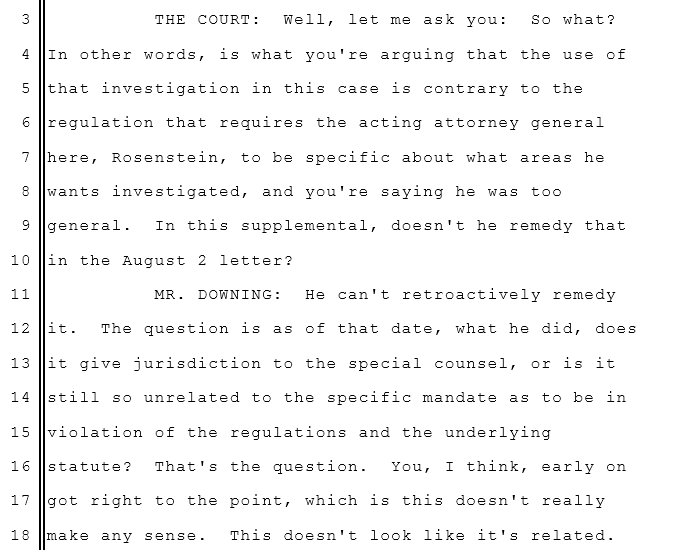 Judge: Isn\’t the right result to give the case back to the EDVA USAO?

Manafort lawyer: No – Mueller had no authority to conduct a grand jury investigation, to get search warrants, to get the indictment. 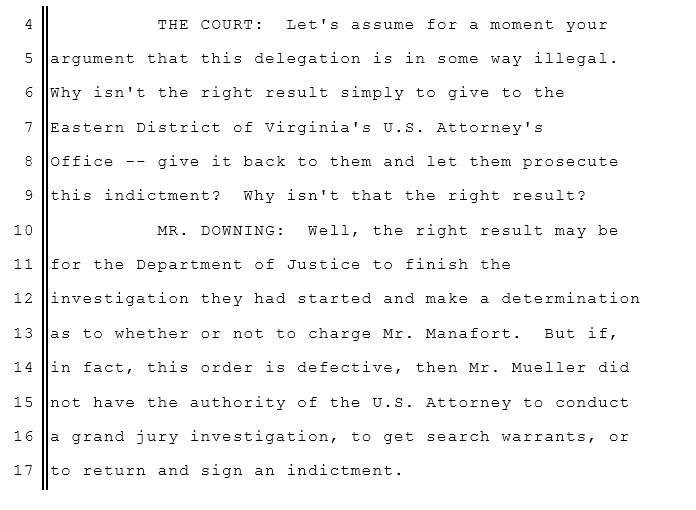 It\’s time to start punching back: Manafort\’s lawyer almost accuses the SC of lying to the court about whether the indictment “arose from” the SC investigation.

The SC\’s arguments are “absolutely erroneous.” 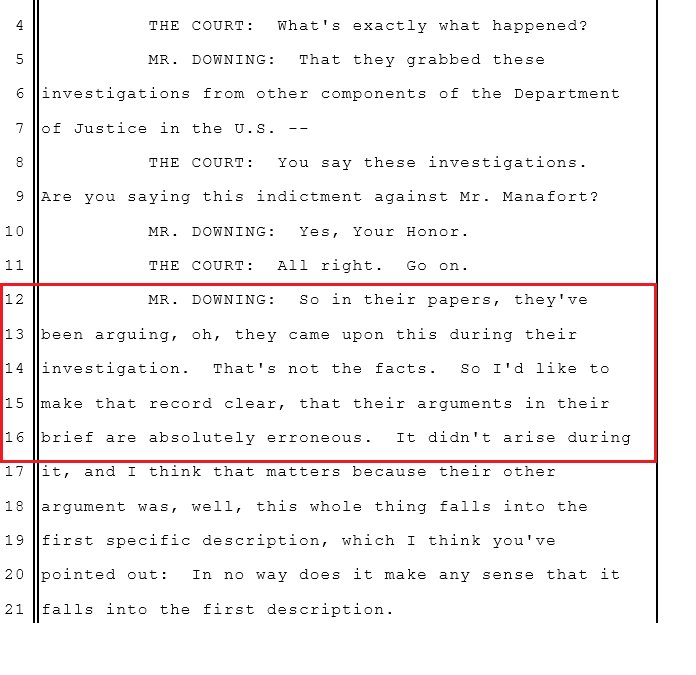 This statement by the SC proves that Rosenstein has hid the true scope of the Mueller probe – and how it has expanded/shifted – from the public. 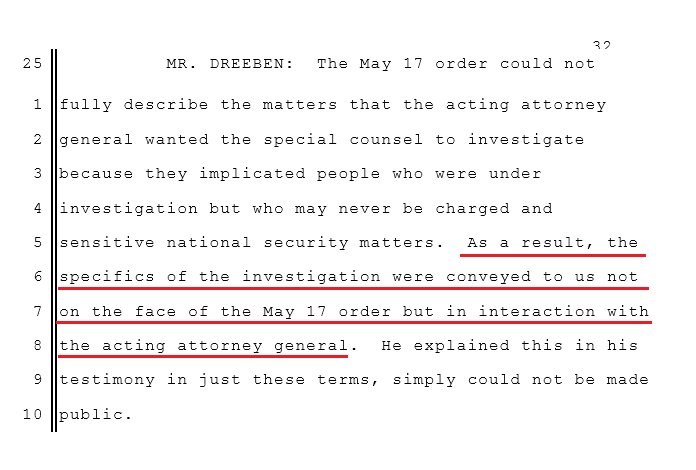 And here we go: Judge Ellis gets after the SC for trying to have it both ways. 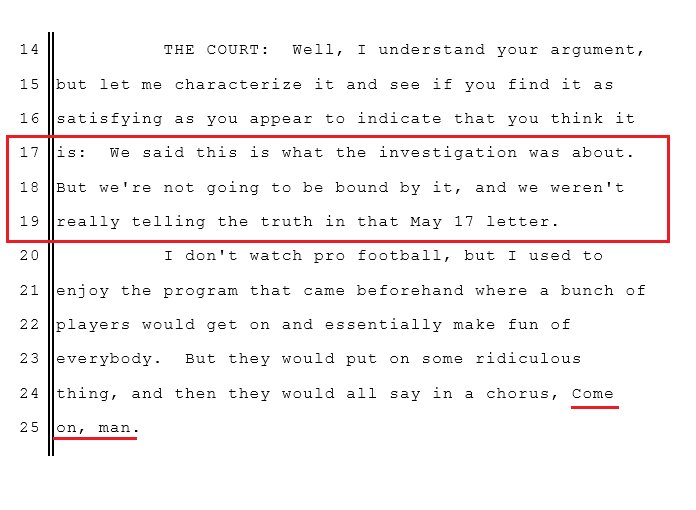 “You really care about what information Mr. Manafort can give you that would reflect on Mr. Trump or lead to his prosecution or impeachment or whatever. That\’s what you\’re really interested in.” 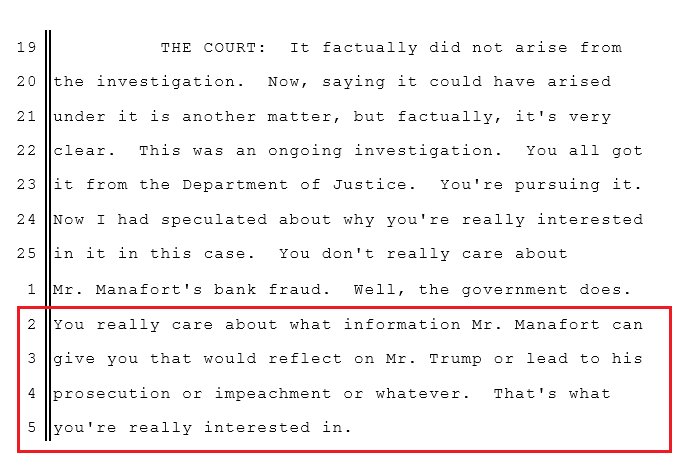 After going through all that, they get back to the real issue: Are the Rosenstein memos from May 2017 and August 2017 sufficient to confer jurisdiction to the Special Counsel?

Judge Ellis contemplating why the Manafort case couldn\’t be sent to the EDVA USAO office by referencing the Michael Cohen case:

“Wasn\’t there a matter in NY recently that the special counsel returned to the Southern District of New York?”

Judge Ellis poses a question (a Q to which he will later provided an answer), asking why the Cohen was referred to the SDNY.

Special Counsel “not at liberty” to answer that question…. 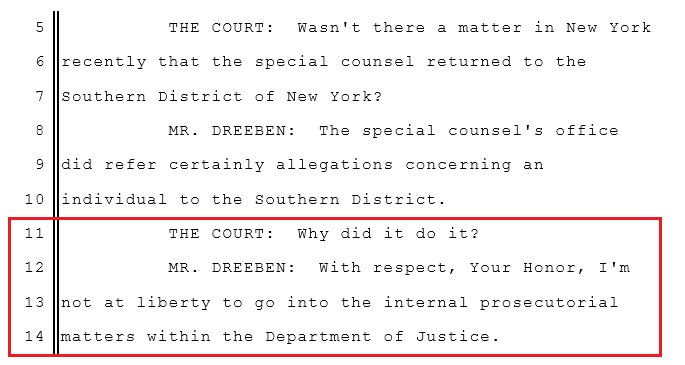 However, the Judge has his own theory:

Did the SC farm out the Cohen case because it wasn\’t within the SC\’s jurisidction, or….

Did it have SDNY handle the Cohen case because they “can\’t use this to further [the Special Counsel\’s] core effort, which is to get to Trump”

The SC\’s explanation as to why the Cohen case is different from the Manafort case isn\’t convincing. 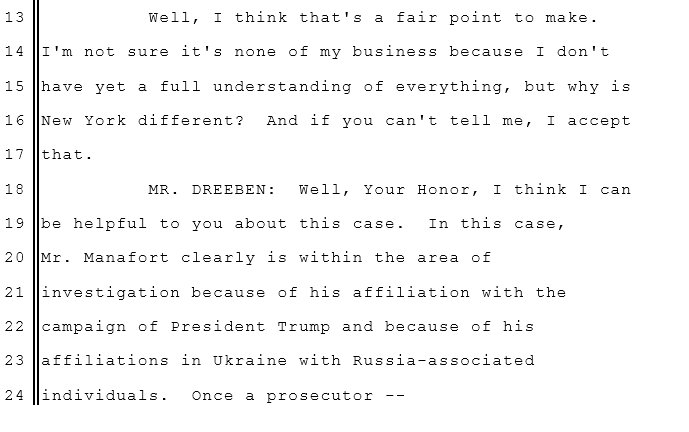 Judge Ellis then tells the SC that the indictment does not mention:

The SC concedes that fact. 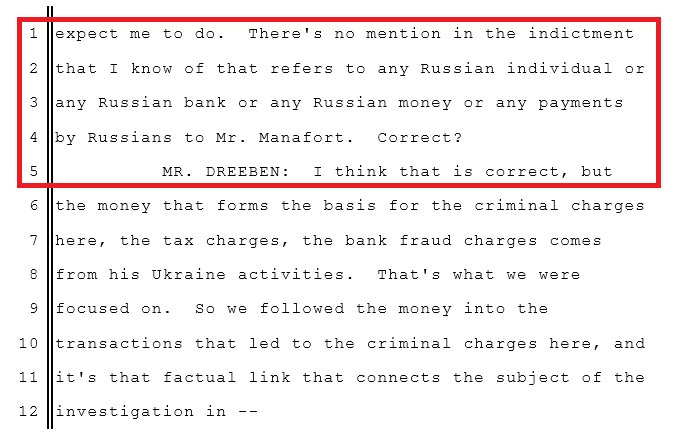 The hearing closed with a request from Manafort\’s lawyer that internal DOJ memos regarding the appointment and scope of the Special Counsel\’s authority/jurisdiction be produced.

The judge took that under advisement. 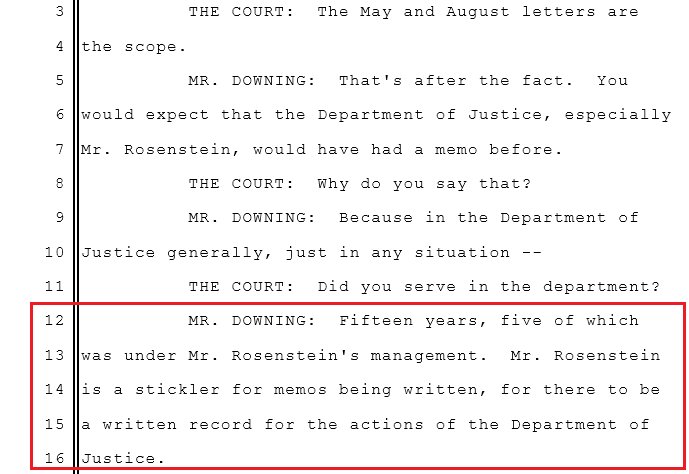