Andrew McCabe’s lawyer sent a letter to Sen Chuck Grassley asking for immunity for his client in return for what he knows about the Hillary and Trump investigations.

Normally I would be against this but the Deep State has been so good at covering up the many crimes this might be worth it. There are a couple of things you need to know about the granting of immunity. The witness must provide what is known as a proffer. A proffer is a statement from a witness saying what he would be willing to testify to if given immunity. Immunity is not absolute. Should the witness lie, immunity goes away. If the witness refuses to testify what is in the proffer, immunity goes away.

If McCabe fingers some of the top people involved in the corruption, then it could be worth it. If he isn’t then Grassley simply has to destroy the proffer and there is no deal. But lawyers know this and I can’t see them wasting time if their client isn’t willing to give up something of value. Since he was in the middle of this corruption, he probably has some valuable and damning evidence to offer.

McCabe’s lawyer says that if his client is not granted immunity, he will plead the Fifth. Should he do that, then Grassley can subpoena him and if he refuses, he can be held in contempt of congress McCabe is already looking at a criminal referral for perjury and I’m guessing, he would like to avoid more charges, but you never know. 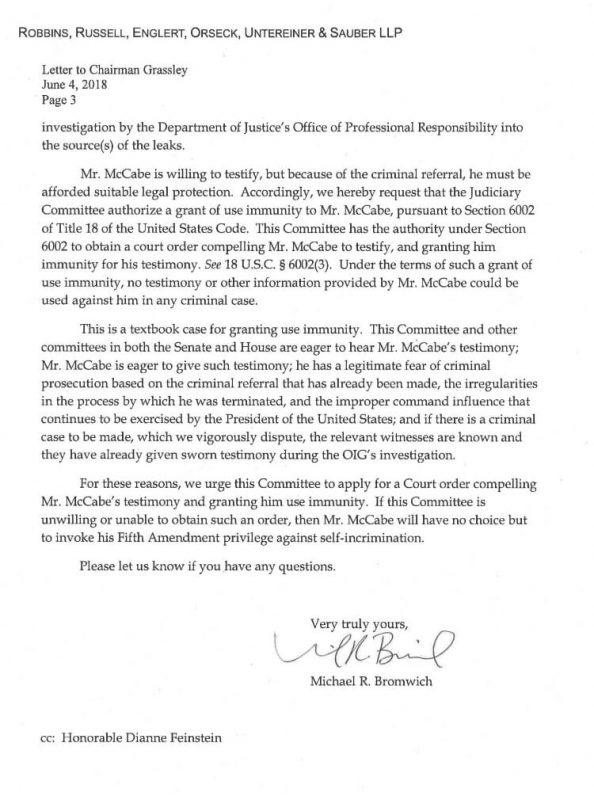 I say go for it because you have nothing to lose since you are not required to grant the immunity after reading the proffer. Better to let one fish go if you can catch a group of them instead.

As reported by Fox News:

McCabe was prevented from providing the emails themselves because of a non-disclosure agreement he was forced to sign by the FBI upon his termination and more information surrounding his account is unlikely to be revealed unless he is granted immunity, his lawyer said.

“If this Committee is unwilling or unable to obtain such an order, then Mr. McCabe will have no choice but to invoke his Fifth Amendment privilege against self-incrimination,” Bromwich added.

Comey has claimed that McCabe never informed him of the leak.