Pictures don’t lie but AOC does.

She tried to portray the Straight Pride Parade as a bunch of white supremacists.

But, if you look at the pictures of the march, you will see a lot of Black white supremacists. Either that or AOC just hates Blacks.

Also, there were 12 speakers and five of them were black.

Three of them Black women.

So I guess AOC can’t stand strong women of color.

If gays can be proud to be gay, why can’t straight people be proud of being straight? 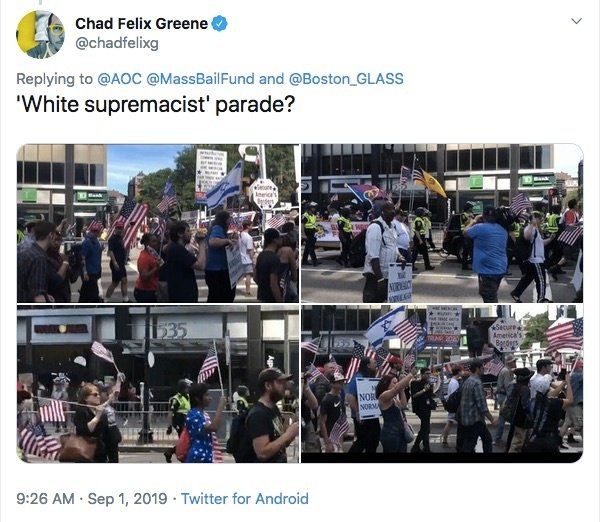 Ocasio-Cortez’s tweet piggybacked on a post from fellow Democratic Rep. Ayanna Pressley, who also asked her followers to contribute to the bail fund and called the Straight Pride Parade an “LGBT hate march.”

In response, Michael Leary — president of the Boston Police Patrolmen’s Association — rebuked Pressley: “Your actions in support of these individuals serves only to encourage criminal and disruptive behaviors such as those suffered by my members this weekend.” He added that his officers “were screamed at, abused and fought by these so-called peaceful protesters.”

The Washington Examiner reported that 36 activists were arrested at the Boston parade, and nine of them were charged “with assault and battery on a police officer. Other charges included resisting arrest, disorderly conduct and assault by means of a dangerous weapon.”

“Four officers sustained non-life-threatening injuries as they attempted to prevent the antifa-fueled crowd of about 1,000 counter-protesters from mixing it up with an estimated 200 parade participants,” the Washington Times noted. “It was unclear how many of those arrested were affiliated with antifa, but photos posted online showed a black-clad antifa activist being carried off by police. Antifa protesters attempting to block a road scuffled with officers, as shown on video.”

A judge on Tuesday upheld many of the charges against the arrested protesters: