In April, the Antifa terrorists will hold a three-day conference in Arizona. One of the workshops deals with an armed offense. Antifa is a domestic terror group that specializes in attacking women and old men and occasionally a young man as long as they outnumber him 10-1.

They also take part in vandalism.

They will also have workshops in  “Practical Taekwondo,” and “Anti-Police Community Support.” 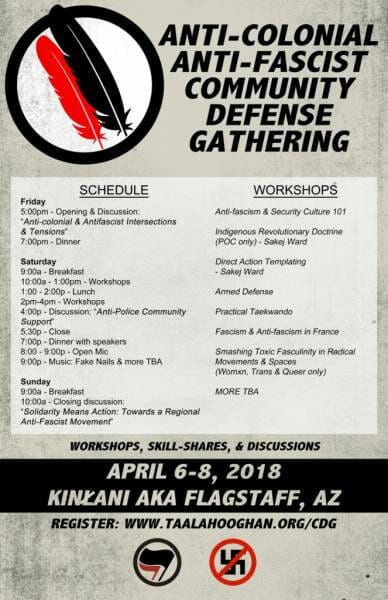 The event will be taking place at the Táala Hooghan Infoshop in Flagstaff and tickets are on a sliding scale from $10-50. “Infoshops are radical information distribution and meeting centers most often organized by anarchists. Their history is largely uncharted and they are spread across the globe,” the website explains.

“A 3-day gathering to provide anti-fascist & anti-colonial workshops, skill-shares, and discussions to further our communities capacities to fight back against all forms of oppression and for defense of Mother Earth,” the event description reads.

The event listing adds that there will be “no drugs, alcohol, or jerks (cops/transphobes/homophobes/white supremacists/misogynists…)” allowed at the event.

Dwayne Dixon, a University of North Carolina anthropology professor and the leader of the North Carolina Antifa group called the Redneck Revolt, admitted last January that he was chasing James Alex Fields Jr. with a rifle just before he ran into a crowd killing Heather Heyer.

Antifa, like all terrorists, are cowards. Even though they have committed violence all across the country, they never attack in red cities, only blue. They also stay away as much as they can when Bikers for Trump are on patrol.