If you read the story without knowing where it took place, you could probably guess it was in Portland. People there are crazy. They try to be so politically correct, they don’t even bother to get the facts before they are ready to protest and demand the cop be tried for murder.

You will read some of the tweets and afterward, you will read the reporting on the incident.

It all started when a homeless man took refuge in front of a man’s front door. The man gave him some water and then offered him ten dollars to go get something to eat or to take the train somewhere.

The man refused and then fell asleep in front of the man’s door. He called the landlord, who told him to call the police. The police came and shortly thereafter the police officer fired three shots and the homeless man was dead.

Another Portland Police officer shot another mentally ill person. It’s like a killing field here. No one will be convicted or even tried. Nothing will be done. The Mayor @tedwheeler doesn’t care. No one cares. We’ll all move on. It will happen again soon. https://t.co/KZWIdUdTlN

A Portland police officer shot and killed a man today after a landlord reported a stranger who appeared to be homeless and suffering from a mental illness lying on a tenant’s door stoop. “I thought I should call the police, they could help him. …” https://t.co/9otEaHDm1f 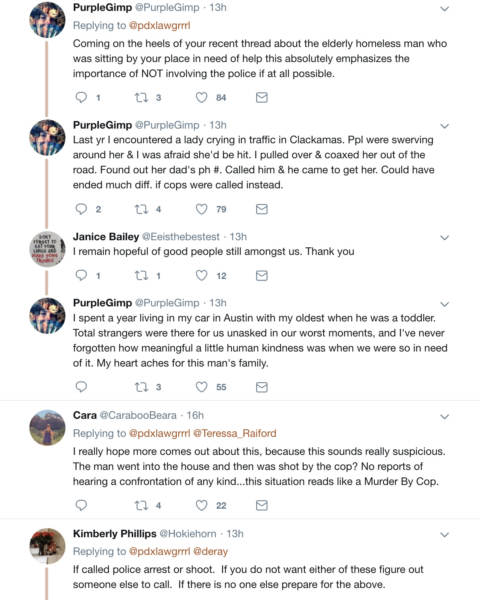 I have homeless family members and have to hold my breath every time I click on one of these stories. The police in PDX are not qualified to deal with dual-diagnosis individuals in crisis. Period. That’s the majority of homeless. https://t.co/QbLEX0PiG1

Pescaia had opened the door to find the man on his doorstep, dressed in a blue shirt, khaki pants, socks but no shoes with a multi-colored blanket.

The man told him that “some guy named Ernest’’ had directed him to the house to get help. The stranger claimed someone was after him, trying to kill him. He also told Pescaia he had been released from a hospital.

Pescaia gave the man some water as he waited outside. Pescaia also offered him $10 to catch a MAX train and to get something to eat, but the man didn’t oblige. Pescaia told the man he needed to go, then closed the door.

About 15 to 20 minutes later, Pescaia looked out and saw the man sleeping on the front stoop right outside his door under an awning.

Pescaia contacted his landlord, Lidiya Omelchenko, who lives next door, and she advised him to call police. She also called police.

Pescaia told a 911 dispatcher that he asked the man three times to leave his property but now the man was sleeping on the front porch.

“I just wanted police to have him trespassed from here,’’ Pescaia said Monday.

According to Portland police, an East Precinct officer responded about 2 p.m. to a report of an “unwanted person” at the home in the 9600 block of Southeast Market Street.

Pescaia said the officer arrived about 10 minutes after his call.

Once the uniformed officer pulled up in a marked car, the man on the porch started pounding again on Pescaia’s front door. The man was shouting that he wouldn’t go with the officer because he had a fake badge, Pescaia recalled.

The officer, now at the base of the front stairwell outside Pescaia’s home, advised Pescaia to put down the walking stick because he didn’t want to have to arrest him as well. The officer also advised Pescaia to close the door and that he’d handle it, but Pescaia remained in the doorway with the door open.

When Pescaia put down the stick, he said the stranger burst through the front door and into the home.

The officer followed and started to wrestle with the man in the front living room, Pescaia said. The officer was on top of the man trying to turn him onto his stomach to place handcuffs on him. Pescaia said he stood nearby, trying to help.

Then the stranger broke loose and kind of kicked the officer backward and into the rear bedroom, Pescaia said.

The man started coming toward the officer, who remained in the back bedroom. Pescaia said he tried to hold the intruder as the officer ordered the man to stand down, Pescaia said. The officer told the stranger that he would use his Taser if he didn’t follow orders, Pescaia said.

The officer shortly after fired the stun gun.

The stranger fell onto the floor at the doorway between the living room and bedroom, but the Taser didn’t stop him for long, Pescaia said.

“He goes down and starts right back up, yelling ain’t no Taser was going to stop him,’’ Pescaia said.

At some point, the intruder pulled out a martial arts-type throwing knife and ran toward the officer, the tenant said.

The officer, still in the back bedroom, this time fired three shots from his handgun — “at close range,” Pescaia said. He estimated the stranger was less than 2 feet from the officer.

According to Pescaia, the stun gun didn’t stop the suspect, who then ran at the officer.

“He rushed the cop, had a 6-inch knife in his hand, cop warned him several times, ‘Drop the knife, get down’, this that and the other, and ‘I’m going to shoot’, next thing I know — three bullets are going off, Pescaia said.

“These guys are awesome,” Pescaia said of the responding police, who brought out a TriMet bus for him to stay warm during the investigation at his house. “And the officer who initially showed up, I know what he has to go through, and I just want him to know that I got his back all the way.”