Investigative reporter Laura Loomer has uncovered a major development in the Las Vegas shooting story. An Uber driver took Stephen Paddock and a woman to the Mandalay Bay and when they got there Paddock warned the driver about an upcoming terror attack to occur there. This was from previously unreleased records from the police that a judge ordered released.

The witness statement is one of many previously unspoken statements that were released nearly one week ago after a judge ordered them to be released. 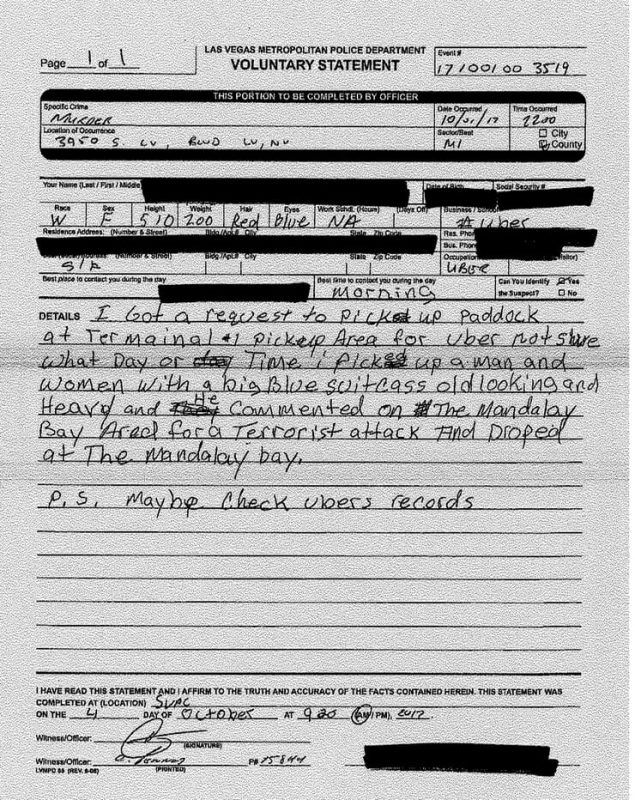 From the police statement:

“I got a request to pick up Paddock at Terminal #1 pick-up area for Uber, not sure what day or time. I picked up a man and a woman with a big blue suitcase, old looking, and heavy, and he commented on the Mandalay Bay area for a terrorist attack and [was] dropped at the Mandalay Bay,” the Uber driver stated in her report filed with the Las Vegas Metropolitan Police Department. “Maybe check Uber records.” –Witness Uber driver who had contact with Stephen Paddock

People are now questioning why we are just learning of this 8 months after the shooting. What we need to know now is if the Uber driver informed the police of this threat before the attack. That could explain why the police have been holding back the facts of the case. Was this yet another preventable attack that the police pooh poohed away.

What else don’t we know?