For two to three years, Sen Chuck Grassley has been trying to get specific documents from the DOJ that neither Sessions or Rosenstein would give up or even answer Grassley’s letter about.

During his confirmation hearing, Barr promised Grassley that he would answer the letter right away. He hasn’t. What could possibly be in those documents that are so bad that even Barr won’t release them? He has been given permission by President Trump to release any document he wishes but so far, we haven’t seen a single one of them.

I hope the appointment of Barr is not another mistake.

Senator Grassley has been trying to get his hands on a document related to the Hillary email investigation, but the DOJ just won’t provide it.  The corrupt DOJ must know that there is something very damaging about Hillary in it or it wouldn’t be released.

Senator Chuck Grassley has been trying for years to get the DOJ to produce some highly classified material in regards to the Clinton email investigation, but the DOJ just won’t provide him the material he has patiently waited to see.  An August 14, 2019, letter from the Finance Committee/Homeland Security/Governmental Affairs Committee (Finance Committee Letter) outlines the progress to date of Grassley’s request.

What the material that Grassley is seeking nobody really knows since Grassley’s October 17, 2018, letter is classified, but apparently, as a condition of allowing Barr’s nomination, Grassley asked Barr, if nominated, will you finally answer that letter. Barr says yes.

Grassley’s October 17, 2018, letter appears to have something to do with an FBI criminal investigation into Hillary’s emails that started in July 2015 which was eventually handled by the FBI Headquarters. 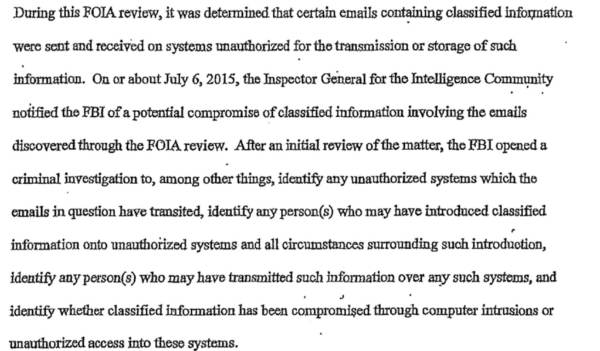